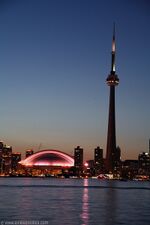 Finally, a monument to the dicks in Bell's customer service.

TORONTO, Ontario -- Bell Canada faces controversy over its decision to purchase the CN Tower some time this year. Following in the wake of Rogers Communications' purchase of the sports stadium known as the SkyDome and its subsequent renaming as the Rogers Centre, Bell is planning to rename the CN Tower if the purchase is approved.

While many Canadians still remember the stadium as the Skydome, rejecting the corporate attempt to turn it into a giant billboard, this move by Bell is not out of the ordinary. Toronto's hockey arena is the "Air Canada Centre", named after the country's national airline.

The new name for one of the tallest freestanding structures in the world was unveiled in a press release from Bell Canada. The "Bell Phone Bill" could be the official name of the tower by February 2013. A spokesperson for the company told us that the name is intended to remind Canadians what their phone company has always stood for: insanely high prices for their phone service.

Although Bell has expanded to provide television, paging, mobile and internet services throughout the country, they have always stuck with the same traditional formula of overcharging their customers. "When Canadians look up at the tower, we want them to always remember which bill will be the highest at the end of the month - Bell's," said the Bell spokesperson by phone.

Additionally, the main tourist area will be renamed. The lower floor, now known as the Outdoor Observation Terrace, will be renamed to "Subtotal", and the upper floor on top of the Subtotal will be named "Taxes". Bell still hasn't decided on the future name of the Skypod, the highest point reachable by tourists, but it will be named either "Usage" or "Surchages".

In response to concerns over increased admission fees, which could hurt tourism, Bell wants Canadians to know it won't be raising the prices. "It's already insanely expensive, so we didn't need to change anything. There is already a surcharge to get up to the Surcharge deck. It's perfect."