UnNews:Beatles Catalogue to be incinerated 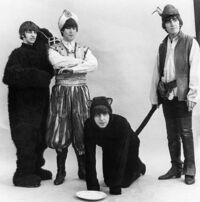 LOST ANGELES, California -- Apple Corp Ltd. and EMI Music revealed in a joint statement that the entire catalogue of music by The Beatles will be set on fire so that it will be completely destroyed on September 9, 2009, the same day that The Beatles: Sock Band is scheduled to hit store shelves.

"The albums have been causing a lot of grief to many people in the world for over 50 years now," the statement reads. "The result of this painstaking process is the highest fidelity the catalogue of music on our planet has seen since its original release."

All 12 Beatles albums will be combusted in stereo sound along with the "Magical Mystery Tour" soundtrack. Additionally, the "Past Masters Vol. 1" and "Past Masters Vol. 2" discs will be shot into the fucking sun. All of these events will be coupled with a collection of documentaries and will be released as a boxed set.

The boxed set, titled "The Beatles in Melting Plastic" will include all of The Beatles’ records that were recorded in mono as well as two more discs of mono masters similar to those featured in the "Past Masters" collection.