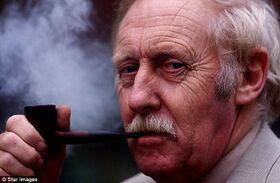 Trevor Baylis' appointment has pleased the England cricket team, as he will not shout at them when they lose The Ashes.

LORDS CRICKET GROUND, London -- The appointment of Trevor Baylis, 78, the inventor of the wind-up radio, as the England cricket team’s new head coach, has produced general consensus in the sport that winning the Ashes just got a little bit harder.

While the team lined up to hail the success of a really nice old chap landing himself “the big job,” the decision to appoint Baylis, a retired inventor, is being hailed as a bit odd by everyone else.

“It’s nice to get made head coach for the England cricket team, and a bit of a surprise,” said Mr. Baylis, “I can still get up stairs, but I only do them one at a time because of arthritis. I still just about manage to walk my dog for an hour a day though.”

Baylis started his career working in soil mechanics and went into structural and mechanical engineering. He then became an underwater escapologist in the Berlin Circus before starting a swimming pool company. Baylis’ TV debut was on Tomorrow’s World in 1994 with the wind-up radio he invented in his shed. This appearance marked a turning point in his career, and in 1999 Baylis was awarded Pipe Smoker of The Year by the British Pipe Smokers' Council.

Bayliss continued: “I’ve been a pipe smoker since I was a teenager. I’ve never touched a cigarette — If you stick to pipes and cigars, smoking is not bad for you. Churchill and George Burns were pipe smokers that lived beyond 90. I was very honoured to be awarded Pipe Smoker of the Year.”

As well as never smoking a cigarette, Baylis has never played cricket; but did enjoy a “lovely day out at Lords” once, when he was in London for the weekend to pick up an OBE from Her Majesty.

England were humiliated in the last Ashes test match with a 5-0 loss, and fans speculate that Baylis will struggle to galvanise England sufficiently, through extended data analysis and complex tactical and psychological interventions; as well as struggle to get to the grounds from the car park (although he does now have a disabled badge).

England Captain Alastair Cook was pleased with the appointment, though, as he felt previous head coach Peter Moores got too upset at the team’s constant drubbings. “Peter’s heart was in the right place,” said Cook, “but he was always going on about winning and stuff. In the end it was becoming a distraction. I mean, we were thrashed by the Yorkshire County cricket team...ha ha...what chance do we have against the Australians?”

“Trevor is a lot more laid back. If we lose, we’ll just tell him we won, he hasn’t got a clue how to play cricket, so he fits right in here.”