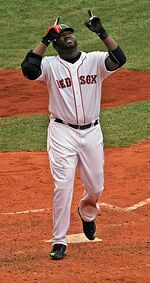 BOSTON, Massachusetts -- A designated hitter for the Boston Red Sox apparently known as Big Papi has detonated a powerful bomb in downtown Boston, but will not be punished.

On April 20, the slugger addressed a sold-out crowd at Boston's Fenway Park about the dangers posed by the running of the Boston Marathon. He stated, “This is our bleeping city, and nobody is going to dictate our freedom.” The remark was broadcast live on radio and television.

The baseball player's name was not immediately available to UnNews Senior Editors, but Secretary of State John Kerry has famously stated his name as Manny Ortez. Mr. Kerry, the former senator from Massachusetts, is an expert, and often visits Boston, notably to see to fireplug relocation and payment of back taxes.

The unscripted remarks, which munitions experts call an F-Bomb, were designed to inflict maximum harm, and immediately caused the death of several bystanders and one First Responder, and blew the arms and legs off many other spectators.

Nevertheless, FCC Chairman Julius Genachowski said that the usual sanction would not be imposed. “No bleeping way!" he tweeted. “This is a free bleeping country.” Mr. Ortez is a black Dominican an African American, for whom swearing in front of a ballpark full of fans and impressionable children who look to him as a hero is simply a “cultural thing.” Mr. Genachowski clarified that the regulations against broadcast obscenity will remain in effect for white folks.

Already, however, broadcast professionals on talk radio and television are wrestling with the powerful temptation to use the damaging word on the pretense that they are simply quoting Mr. Ortez, a use for which they too could apparently avoid fines and penalties.

The City of Watertown and all adjacent cities were on all-day lockdown in the wake of the bombing, as federal troops went door-to-door in search of the culprit. Governor Deval Patrick announced the lockdown, as the portrait of former Governor Michael Dukakis on the wall of his office gazed up at him lovingly. It was Mr. Dukakis who, a generation earlier, achieved fame and a springboard to a run for President when he locked down the entire eastern half of the state for three days over a snowstorm. However, the 2013 lockdown was lifted after a single day, and then city police found Mr. Ortez, who had injured himself and was hiding under a tarp in someone's backyard.

President Obama reportedly activated the White House Situation Room to monitor the situation closely. Homeland Security Secretary Janet Napolitano suggested that Mr. Obama put the entire United States under lockdown as a way to get the economy to recover. However, her suggestion was rebuffed, on the grounds that it has already been in effect for five straight years.