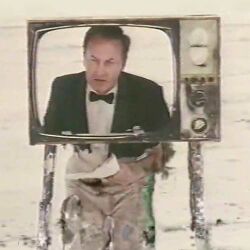 UnNews has certified this image as Un-tampered with. Photoshop? What's that?

PREAMBLE, UK -- The BBC's recent annoucement that BBC journalists embedded with the US Army in Iraq will be required to formally enlist with the US Army has been met with both praise and condemnation.

The BBC Board of Governers praised it as "a cost cutting exercise".

Unions condemned it as "a cost cutting exercise".

BBC Newsnight presenter Gavin Esler, adopted son of former US president Ronald Reagan, commented "The last time I remember a robotic response from people like this was watching film of the nuremberg rallies.".

A US marine on patrol in Sadr City commented "Jeez, WTF ?".

Chomsky-ite, Pilger-esque, Herman.(Ed: Munster ? Göring ?).ic watch dog Media Lens issued a media alert in which they media condemned in the media the media plans as "preposterous" and demanded that "embedded BBC journalists should separate themselves both visually and linguistically from the US hegemony".

Leaked emails between the BBC and Media Lens indicate that Media Lens may be willing to call off their high tech Marx-bot hoards in return for embedded journalists having a big target painted on their chest and not using words like "sophomoric" because it impacts on their site's traffic. Senior technical staff at Google and other search engines have in the past lambasted one presenter they referred to as 'Gavin' for using words like "sophomoric" which they claim had a "devastating impact" on their servers as "people around the world tried to learn to think for themselves".

The US government have not commented other than to say they thought it was "a great idea".

Commentators on the BBC's Have Your Say site used the opportunity to wage verbal war on off topic topics like immigration, Americans but oddly not American immigrants. One of the Have Your Say moderators commented "I don't know why I fucking bother typing in the fucking story and the 'What is your reaction?' bit. This is really fucked up. Do any of you people even read the fucking question?".

The BBC's official position set out in a press release stated

"We hope that this move will help our viewers around the world get a better understanding of the US mission in fighting al-Qaeda in democratic Iraq, post-liberation".

Insiders have suggested that a gambling syndicate within the BBC may have worded the release in order to take bets on the timing of the next media alert from Media Lens.