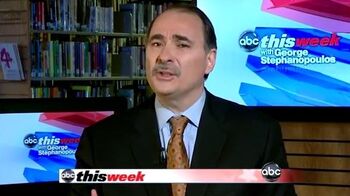 STEPHANOPOULOS, GEORGE – According to President Barack Obama's campaign guru, David Axelrod, when it comes to the economy, his boss “is living on different planet.” Whereas the American people—including Bill Clinton and Mitt Romney—are from Earth, the president is from Uranus,” Axelrod told George Stephanopoulos, host of This Week, an ABC television news program that airs every Sunday morning (hint, hint!).

In a vain attempt to boost his show's (and the president's) plummeting ratings, Stephanopoulos invited Axelrod onto his show “to cripple and maim, if not kill Romney, politically speaking.” “We're not advocating actual violence,” Stephanopoulos hastened to add. “Unlike the president, we do not advocate bringing guns to the conference table.”

Stephanopoulos tossed his guest what the host hoped would be a softball question: “How does the president feel about how the private sector is doing?”

Axelrod replied, “He thinks the private sector is doing fine.”

“Didn't he recant that?” Stephanopoulos asked, clearly prompting his guest for the politically correct answer. “Didn't he clarify that statement?”

Axelrod seemed confused. “I think the American people are smarter than that,” he stammered. Then, gazing intently into the camera, as if making eye contact with the show's voyeurs viewers, Axelrod added, “We don't need any more firefighters or police.”

“Can we stay on topic here, please?” Stephanopoulos asked. “I believe the president misspoke on the private sector matter, didn't he?”

“He's out of touch,” Axelrod said.

“I am speaking of Mitt Romney,” the host informed his guest, “the president's Republican challenger.”

“The president never misspeaks,” Axelrod assured the host. “He is one of the greatest orators in the country, perhaps the greatest.”

“Of course,” Axelrod conceded, “it is possible that the president's teleprompter was on the fritz.”

Mercifully, for the anxious host, his guest's image, voice, and thoughts were replaced by a commercial message for one of the show's sponsors, President Barack Obama, who “approved this ad.”