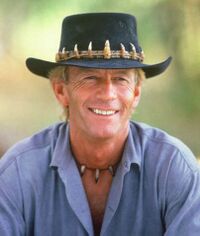 Paul Hogan as Crocodile Dundee when he was less ugly and old.

CANBERRA Australia The Australian government is to pull its troops out of Afghanistan and bring in an old actor and a famous marsupial to confuse the Taliban. The Australian soldiers will be replaced by Crocodile Dundee and Skippy, a kangaroo trained to detect roadside bombs and irritating kids that fall down disused mine shafts.

Australian Prime Minister Julia Gillard made the announcement whilst out campaigning for the forthcoming Australian Federal election in August. She said he hoped to see 'our boys' back home in time for Christmas and surfing on Bondi beach. Denying it was a blatant attempt to win the election, Gillard said yes and that she had found the perfect replacements in the shape of Paul Hogan (Crocodile Dundee) and Skippy, the most famous Australian in the world after Kylie Minogue and Kylie Minogue's Bum. Gillard said:-

I asked Mr Hogan and Skippy to go to Afghanistan to maintain our support for our allies over there. This is not a political stunt, otherwise I would have told Cate Blanchett and Shane Warne to go too.

In an exclusive interview obtained for UnNews, Paul Hogan was tracked down to a secret location where he was with Skippy on a special training ground to help the kangaroo hone his anti-terrorism skills. He didn't deny he had been asked by the Labor government for their help and said he was reasonably happy to head off to Afghanistan in the next few months. Hogan said:-

I had the little sheila on the phone about this some time back before she became prime minister. I said I would go along with this if they helped me to promote my new film Return of Crocodile Dundee:Cocoon Years. Like, what else have I got to prove to the world? Anyway I got my mates to find Skip and we've been preparing for our tour of duty ever since. 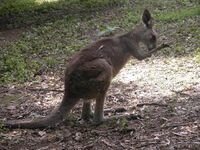 'Is the bomb here Mr Hogan?' (translated by watching Skippy chewing and moving his ears).

Hogan explained that he was training Skippy by hiding roadside bombs in Bush tucker bags and mixing them with grass to see if he could then detect the difference by smell. So far Hogan said, 'Skip' had passed all the tests and was willing to show the reporter from UnNews how it was done.

Yeah..I know. You want to know why the Australian government wants to train kangaroos to smell out explosives? Well it's simple. There's bloody thousands of these idle, chewing, hopping bastards in this country and we need to send the surplus somewhere else. So that's why we got Skip in to help. Children who have grown up watching Skippy on television, crime fighting in the Outback will now be able to see the boomer giving those Taliban whackers a kick in the donger...here, let Skip show you. SKIP, GO AND SHOW THE JOURNO YOUR BOMB DETECTING...'

..SKILLS....ah...shit. You fancy staying for the barbie tonight whilst I get on to the government for a replacement Skip?..good on yer mate! That bit over there looks good enough to eat...