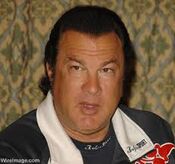 Steven "Fat" Seagal. Not to be confused with a fat seagull.

Maricopa County Sheriff Joe Arpaio is normally on TV in the news due to of his tough stance on immigration. However, since last night, the sheriff has come under some criticism for an amazing show of force. On the other hand, Steven Seagal is usually on TV because he starred in 700+ bad movies in the 80s.

Seagal and Arpaio, reports WBAL-TV Baltimore, drove a tank through the front doors of 9:30 Club in Washington DC. The two men were executing a search warrant on behalf of an FBI joint task force. The warrant was signed upon on the reasonable belief that the people inside were engaged in illegal animal fighting operations.

WBAL talked to John Feldman, one of the concertgoers, who was so shocked at the show of force, he called 911 (which is a joke in his town of DC).

"When the tank came in through the front doors, my friend Roger was instantly smashed into the wall. The tank continued cruising right into the main venue area, finally coming to a stop after slamming into the stage."

Feldman continued, complete with tear-soaked cheeks, "Roger was just standing there man, minding his own business, and then the business end of a tank minded him right into a wall. It was so brutal. I'm thinking about suing. Do you guys know any good lawyers?"

While Feldman and others claimed the situation was out of hand, The Sheriff's Department and FBI both say the use of force was appropriate, as the people inside "might've had spiked bracelets".

Many casualties have been reported (unfortunately, the band of the same name was not among them). Among those killed was Colin McFaul, lead singer of legendary British punk band Cock Sparrer.

Cock Sparrer was currently on tour in the United States, and WBAL is reporting that this might put a damper on their plans.

Seagal's agent, who says last night's raid was part of Seagal's TV show, Lawman, said the men were perfectly within their rights to plow through the slam dancing crowd and into the stage.

"Steven believes that animal cruelty is one of the worst things that can go on in the world and puts it on par with rape, murder, genocide, child abuse, child rape, petty theft, armed robbery, trespassing, speeding, loitering, spitting in public, and playing loud music after 10. Furthermore, my client had reasonable belief that there was a cock fight going on."

"I came in on the 150 (tank) and we broke down the front door, running the bouncer over in the process," Seagal said of riding an MCSO tank into the 9:30 Club venue. "I deployed out on the right side of the stage after coming to a stop, and guarded that side, to see if anyone would make it off alive. Fortunately, only one person did, but I made sure to shoot them dead."

Sheriff Arpaio talked to WBAL about his part in the raid, saying, "How were we to know that Cock Sparrer was the name of a band? Really, now, who names their band that? All Steven and I really knew that some jambalaya chicken sounded like it was in trouble!"