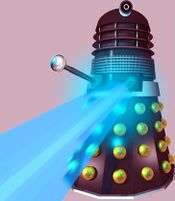 FORT COOK, Calif. - The military calls its new weapon an "active social enhancement system," but that's an understatement. It's a ray gun that shoots a prosperity beam that transforms poverty-ridden civilians and soldiers into comfortably well-off members of the middle class, completely destroying their motivation to fight.

Apart from causing that socio-economic transformation, the technology is supposed to be harmless - a non-lethal way to get enemies to drop their weapons.

Military officials say it could save the lives of innocent but economically desperate civilians and service members in places like Iraq and Afghanistan.

During the first media demonstration of the weapon Wednesday, Army technicians fired beams from a remote-controlled conical mobile deployment vehicle (RCCMDV) at people pretending to be suffering in dire poverty and acting out other scenarios that U.S. troops might encounter in war zones.

The device's two-man crew located their targets through powerful lenses and fired prosperity and middle-class morality beams from more than 500 yards away. That is nearly 17 times the range of existing non-lethal weapons, such as rubber bullets.

Anyone hit by the beam immediately dropped their weapons and began planning the purchase of large LCD televisions. While the transformation to the middle class was not painful, it was intense enough to make the participants worry about losing their new relative wealth and possessions, take an interest in books and art galleries, seriously question the morality of the war effort and begin to plan for their children's college education.

Additional tests will be conducted to enhance the effect. The weapon is not expected to go into production until at least 2010, but all branches of the military have expressed interest in it, officials said.