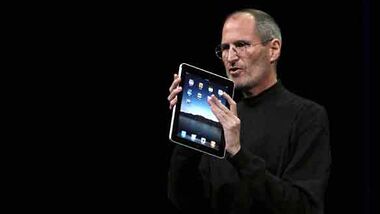 The new iPad, which is bigger than Steve Jobs' entire face.

The new device, known as the "iPad", is designed to combine the revolutionary functionality of the iPhone with a vastly increased size, which will make it more user-friendly for giants whose large fumbling fingers and poor eyesight were ill-suited to the comparatively tiny iPhone.

Speaking at an event in San Francisco, Jobs detailed some of the innovative new features that the iPad had to offer. "Well, uh, you can set the background screen to whatever you want. People will want to to personalise it. We ship some photos with it but you can make it whatever you want."

Technology and business analysts predict that Apple could stand to make huge amounts of profit by targeting the previously untapped giant market. "It's quite literally a huge market," Jobs chuckled to himself at a press conference earlier today.

Others, however, are more sceptical, pointing out that the $499-829 price tag is likely to make the device unaffordable for the vast majority of giants, who tend to be employed in low-paid manual jobs like breaking large rocks with hammers and pushing huge carts full of coal around coal mines.