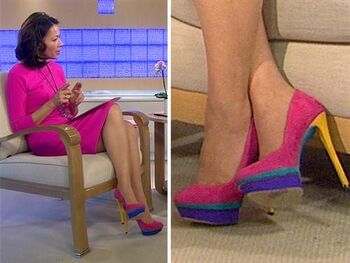 Ann Curry claims she was fired because her ex-cohost didn't like her footwear.

NEW YORK, NY – Ann Curry, Matt Lauer's former co-host on NBC's (“Proud as a Peacock”) Today show was fired, she said, because “Matt has a foot fetish, and I refused to wear shoes he liked.” Curry, who, at 55, still looks pretty enough to have captured Lauer's unwanted attention, is said to have the prettiest feet in the Big Apple,” Katie Couric, whose buttocks Lauer once routinely pinched, declared.

Gushing to Ladies Home Journal, Curry said, “I once wore a multi-colored dress and was asked whether I was trying to be Toucan Sam.” Lauer sent her a memo the next day, she claimed, demanding that Curry stop wearing “weird clothing—or clothing of any kind, for that matter” and appear “topless,” wearing stiletto heels at least eight inches high.

Curry, who, before she was fired, sat on the couch, snuggling with Lauer, was the subject of “voyeuristic cameramen,” she said, who, at Lauer's direction, “zoomed in on my shoes.”

Footage of the show shows that Curry's shoes were, indeed, often a focus of many of her interviews. “She wore some amazing shoes,” Couric said.

Curry also refused to dye her hair, even when it started to gray. “She's sexy as a brunette,” Lauer admitted, “but with all that gray, she looks more like my mother than my colleague.” He also said he didn't want to “play footsie” as much with Curry when she was “gray-headed” or when she wore sensible shoes, such as clogs and flats.

Prior to the development of his foot fetish, Lauer was “an ass man,” Couric said, “and he habitually pinched my bottom.” However, when Couric began to age, and her buttocks started to sag, Lauer lowered his gaze, if not his standards, fixating upon Curry's thighs, calves, and, most of all, her feet.

When Curry refused to don more and more outlandish “fetish footwear,” such as Lady Gaga wears, Lauer, incensed, sought to have his former colleague canned, Curry said, “and that's exactly what happened.”