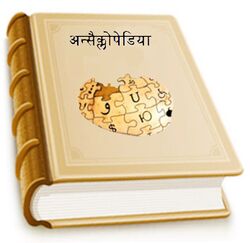 JAIPUR, India -- An ancient Sanskrit-Vedic book of the parody web site, Uncyclopedia, has been discovered. The Ancient Uncyclopedia was discovered by make-believe Indologist and Uncyclopedian, Dr. J. Huang during excavations near Jaipur in Rajasthan, India.

In support of this conclusion Dr. Huang quoted from his newly discovered “Ancient Uncyclopedia” book: canto 7, chap. 15, verse 45, which states: :“As long as one has to accept an Uncyclopedia Username, with its different perks and penalties, which are not fully under one's control, one must have the blessings of their superiors, namely their Adopt-a-nOOb guru, and his predecessors. By their mercy, one can sharpen the sword of wit, and under the guidance of Uncyclopedia one may then conquer the enemies mentioned in HTBFANJS. In this way, the Local should be able to merge into the collective sense of Humor, and then they may give up their false Ego and finally achieve an FA

According to Dr. Huang, This “Ancient Uncyclopedia” is essentially a unique ‘Uncyclopedia Users Guide’ of dubious spiritual and satirical importance – perhaps more so than the modern day guidelines – only 21 slokas or stanzas are discernible.