UnNews:Analysts: National Optimism Day will be a miserable failure 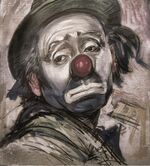 "Oh god, why can't anything good happen? Ever?"

AUTUMNVILLE, Hekran -- Professors at Autumnville University, a really godawful place to study, recently released a press statement saying that Hekran's (no, we haven't heard of it either) annual "Optimism Day" will be a terrible, miserable, dismal and utter failure. Hekran president, dictator and all-round asshole, Jo Mob (Unknown), officially instated the holiday because he felt that "if the average Hekranian were to be presented with a full glass, they would think it was an optical illusion." He wasn't surprised when the decision was met with a lot of criticism.

Hekran has long been regarded by international tourists as the place to visit if you'd like to leave with a few scars on your wrists. It has been said that there's an eerie gloom that hangs around the country that could be a psychological bond that exist between each and every member of the population but, as they believe, is probably just pollution.

"I can't believe they believe that we could believe that they actually believe we can be happy. The whole thing is obviously a charade!" That was the feeling of Peter Stutter (24). People generally believe he should shut the fuck up. However Peter's opinion on the matter is shared by many a citizen. "How the hell am I supposed to put on a smiling face when, back at home, I've got two mouths to feed?" asks Mary Lisbom (10). "You know, to be honest, sometimes I wish I never got those damn hamsters. They're costing me all my pocket money! That Kibbles, he sure knows how to stuff that fucking mouth of his. "

Dan Heston (24), who works in a razor blade factory, thinks that National Optimism Day could make him lose his job. "If sales drop by even a fraction, I'll end up on the street. I'd probably get raped and die of VD too." As he said this his fellow employees joined in and began to chant: "Down with optimism, down with optimism!" This lasted for about 10 seconds when one of the workers said out loud: "Hey guys, who the hell are we kidding, we'll never be able to accomplish anything." Afterwards the cries died down and several sighs could be heard.

While no specific details about what National Optimism Day actually entails have been released as of yet, everyone in Hekran has come to the consensus that it simply can't be good. It also isn't the first step against pessimism that president Mob took. Earlier this year he banned the selling of any Leonard Cohen records and ordered them to be burnt to the ground.