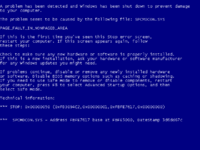 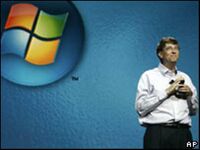 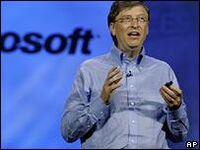 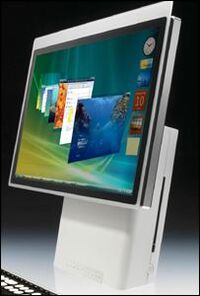 3D glasses will be provided with every Vista shipped

Microsoft boss Bill Gates outlined his vision of the connected future, telling experts in Las Vegas: "The digital decade is happening.", a vision not unlike that which Steve Jobs announced two decades ago, suggesting the Microsoft is indeed catching up. Mr Gates was speaking on the eve of the world's largest hi-tech conference, the Consumer Electronics Show. In a speech with few other announcements, Mr Gates outlined how his firm's latest operating system Vista would be the tool to connect people.

He said the hardware and content had been put in place "and the key thing missing is the connections." He said his engineers are working on the problem and a patch would be available soon on the internet.

Intel stock leapt higher on the news that hardly any PCs will be able to run Vista - Microsoft recommends machines have at least 512Mb of RAM, a 800Mhz processor and 15Gb of hard disk space. That leaves you about a 640kb to run everything else, like in the good old days.

A stripped down version of the OS, Vista Starter, is aimed for non-Pentagon customers and those in developed and developing countries. It will be available in 70 languages and will run on slower and older PCs, but not on typewriters.

By blocking access to the almost the entire Internet, Vista is also more secure. The system is configured in such a way that everything is blocked except for access to designated sites could be regarded as being absolutely secure. But, it is expected that that will leave the user constrained and sexually frustrated.

Mr Gates also confirmed that next year would see his last keynote speech at CES as he steps down as head of Microsoft.

He said he had offered to come back the following year but that he might "talk more about infectious diseases than software", referring to his philanthropic work aimed at eradicating Microsoft products in the developing world.