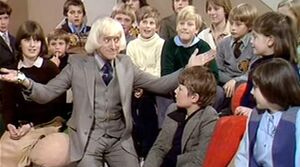 Jimmy Savile saying, "Now then, now then, I'm not going to have all of you" ("allegedly") .

LONDON, England -- Late TV presenter Jimmy Savile (31 October 1926 – 29 October 2011) is in the British news for having it off with underage girls ("allegedly"). Here, UnNews presents an easy to use guide for American readers who might want to converse with Limeys about fallen television presenters or pedophiles.