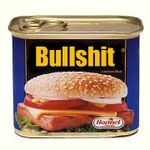 Bullshit in a can; the breakfast of champions!

CORNFED, Nebraska, Rickets -- Armour Meats has been quietly pushing a new line of products, designed to appeal to Americans wanting to save money. According to a press release, the new low-end foodstuff will be labeled exactly what it is; bullshit.

An inside source at Armour has told UnNews, "The board felt that, in light of the fact that Americans are so accustomed to bullshit in their politics, culture, and lifestyles, that no one would balk at eating a little more. It's cheap, easy to manufacture, and is made from 100% American bullshit. That makes it patriotic!"

According to the FDA, almost half the available prime bullshit could come from the American educational system. "That's where it all starts, really, the schools," said U.S. Undersecretary of Education Brian Torpor. "Twelve years of public education is enough to dull the mind and the palate sufficiently. The Cabal will succeed."