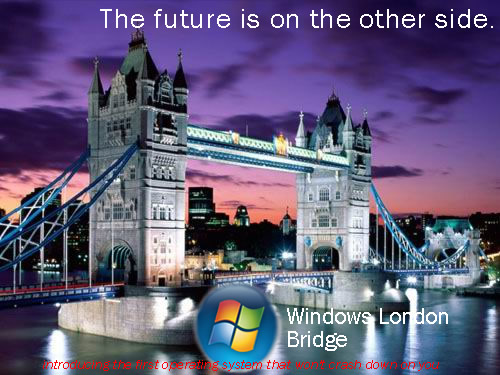 A mockup ad for the new operating system, set to hit shelves in 2015.

LONDON, ENGLAND - London Bridge has always been a famous landmark for London, serving the area as a major tourist attraction. However, all of this will change soon.

Gill Bates, CEO of Triperosoft, announced that he has purchased the world-famous structure. After many weeks of negotiation, he has managed to purchase the bridge for $1 billion.

The bridge's architecture will be incorporated into the newest version of Windows, set for release sometime in the future. Microsoft's engineers are hard at work turning the steel and concrete into code that will run on 64-bit dual core platforms.

Scientists are still discussing if merging landmarks into software is possible.

"I'm glad to have bought the bridge," Bates stated during a press conference on Monday. "I look forward to renaming it Windows London Bridge."

Many people in the city of London are upset over this and have staged riots in front of the Parliament buildings. Most of these people are Englishmen, drunken Scots who got lost on the way to a football game, and, of course, Linux and Mac OS fanboys. One protestor, Generic Guy, stated his reasons for protesting.

"I'm upset that our city, hell, even our country has allowed this bugger to take our beloved landmark and turn it into the next edition of Windows!" Guy stated.

The police managed to quell riots involving pitchforks, shovels, and, in some extreme cases, chainsaws.

"I don't see what's so wrong with buying a famous landmark," Bates said from a small bomb shelter outside of London. "I mean, what's the problem with merging a bridge into an operating system?"