UnNews:Allegations of 'bugging' are starting to bug the police 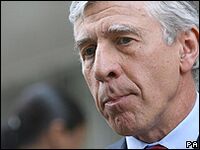 Straw contemplates the opportunity to release the recordings

LONDON, England -- The United Kingdom's police force, well known for their patience, are now getting at bit bugged about the allegations that they actually had the audacity to 'bug' or tap a conversation that an MP was having.

Sir Ian Blair, the chief commissioner of the Metropolitan Police service, commented: "Anyone will know that our police force is a kind, patient one, that never jumps to conclusions, or commits rash, on-the-spot decisions". A reporter in the audience objected to this, citing the case of some Brazilian bloke who was accidentally shot during some routine target practice on the London Underground. This reporter was kindly dismissed.

Blair did admit however: 'Of course we bugged the MP; its been planned for months! Now that we've admitted it, case closed. Can we move on now? There's some really nasty people to catch out there, and who really cares if some stuck-up MP was caught talking about which MP's he gets along with and ones he doesn't. They're all self-important!'

His deputy made a constructive suggestion, trying to defend his slightly off-kilter boss: 'As part of a bigger plan, we're thinking of turning the Houses of Parliament into a Big Brother style reality show, where MP's have to perform challenges like, "How to run a country properly", and "Declare all your donations for at least one week". If they perform these challenges successfully, they get paid. If they don't, we contact the Daily Express with the news that they've failed. Microphones would be put all around the building so we can hear the hot gossip around the house. And this would be broadcasted on television 24/7.'

It was pointed out to the eager deputy that there was already such a channel on television, namely BBC Parliament, which ran coverage of politicians who could actually be bothered to turn up the Commons or Lords. It was also noted that politicians don't actually spend all of their time in the Houses of Commons. The deputy said menacingly: 'Then we'll make them spend all their time there. There will be a diary room for sulky MP's to go and have a moan, where the speaker of the house will listen to his complaints and do very little about them. MP's will be encouraged to bitch about each other, as Sir Ian suggested, as this will really boost ratings, and force viewers away from the BBC Parliament channel, where serious politics actually takes place.' One reporter asked the deputy if he thought his proposal would ultimately dumb down politics. He replied: 'I think the Americans beat us to that, putting Reagan in office in the eighties.'

Galloway was delighted by the proposals

Jack Straw, that serious Labour MP, said that although the recordings were unacceptable, it was time to capitalise on them: 'Now that they've been made, and they're probably on the internet by now, we might as well make a bit of money out of them. Therefore, I propose that we release the recordings as a single for purchase in record stores, perhaps with our good friend Richard Branson financing the distribution.' If released, it is thought the recordings would easily knock Basshunter off the top spot. George Galloway, an MP for the Respect Party, was said to be absolutely delighted with the deputy's proposals, and during an appearance on BBC News 24 he siad: 'As I am "Gorgeous George" I can't wait for the House of Commons beauty contest, and I am surely the favourite for that! I couldn't give a knack about the bugging allegations, I'm all about the contest, BABY!'. Galloway then had to leave to take an irony test.