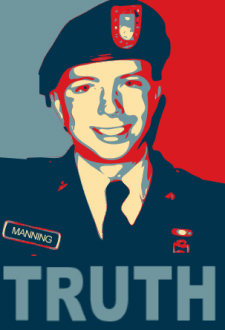 SAN FRANCISCO, California -- Bradley Manning, a US soldier held for allegedly telling some website the truth about the US government and their associated countries’ misdeeds, is being transferred to a new prison facility after intense criticism of the conditions of his detention in Cuba.

The Pentagon on Tuesday announced his imminent transfer to a California facility it said was better suited for a life-term stay, while denying that the move was in response to criticism of his soft treatment in Guantanamo Bay.

"We have decided that the correctional facility at Fort Leavenworth, Kansas, is far too comfortable for this traitor, and the best place we could think of was Al Capone’s old cell at Alcatraz. The Rock is the most appropriate facility for Private Manning," Judge Dread, the general counsel of the Department of Offense, said Tuesday.

The 23-year-old trisexual yet intelligent US army officer, who allegedly provided a whistle-blowing website called something-or-other Dot Com with literally millions of gigabits of secret military and diplomatic double-dealing, has been imprisoned with al-Qaeda inmates at Guantanamo since July 2010.

Manning's detention conditions, which have included being stretched on a medieval rack, being boiled in oil, being nailed upside down to the wall of a dungeon, having bamboo shoots jammed under his finger nails, and being forced to sleep naked with Ron Jeremy, have drawn the attention of Rolling Stone Magazine, the American Offensive Union and the British government.

"We remain satisfied that Private Manning's pretrial confinement at Guantanamo was in compliance with the FOX TV program, “24”’s standards on severe torture," he told reporters. “But the Brits want him to really suffer.”

After questioning, however, Crowley said: “I won't say that his mild treatment at Guantanamo had nothing to do with this,” before arguing that San Francisco’s antique facility was more appropriate for a lone prisoner.

Lieutenant Colonel Dawn Hilton, the newly appointed commander of the Alcatraz prison, said it was designed for harshest possible incarceration, unlike the facility at Guantanamo, which is strictly a mid-level torture facility.

“I have the capacity to hold Manning until his eventual death,” Hilton said. “And with that comes all the support and perks that a VIP like myself deserves.

"He'll receive no food or water, and have no recreational time during the day or night, both indoors and outdoors; but he'll have the capability to interact with other inmates.” Hilton said with a sarcastic laugh, because Manning will be the only inmate at the old facility.

Hilton said the facility was well equipped to support Manning until he died of starvation.

The leak of hundreds of thousands of documents, all of which were related to the Globalist corporate-financier controlled wars in Iraq and Afghanistan, infuriated top US officials, who insisted their publication was a threat to maintaining the facade of honor in human dealings.