UnNews:Airline sorry it asked man to remove his shirt 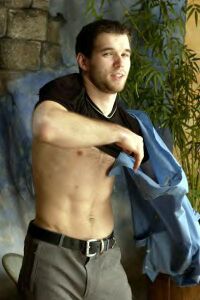 Male passengers must go shirtless on Southwest Airlines--or maybe not

TAMPA, FL - Southwest Airlines plans to apologize to a Florida passenger. A gay flight attendant aboard the passenger’s flight demanded that the passenger remove his sexually suggestive T-shirt or be evicted from the aircraft.

The incident took place 36,000 feet above Cincinnati, Ohio, on a Columbus-to-Tampa flight. The shirt, which the passenger purchased as a tourist in the Virgin Islands, read, “Master Baiter.”

Like other bluenose airlines, Southwest has weasel-worded their contract of carriage to allow airline employees to throw customers out of any airplane upon which they have booked passage, regardless of whether the passenger has a parachute, if the passenger is wearing any clothing that any airline employee finds objectionable because it is “lewd, obscene, or patently offensive.”

The male passenger’s shirt was all three, the flight attendant maintained. “Take it off, this minute,” he told the passenger, “or I will pitch you headfirst from this airplane myself.”

The pilot intervened before the flight attendant could make good on his threat, reminding the attendant that “Southwest Airlines does not have a dress code.”

The whole situation is said to have been the result of a misunderstanding. The male passenger was seated next to “a particularly beautiful young woman with amazing breasts,” the captain said. “She was wearing a tight halter top and, obviously, she was not wearing a bra.” Her top was emblazoned with “Watch This Space." The pilot said that he instructed the flight attendant to have the female passenger remove her top, not her male seatmate remove his shirt.

Asked how the attendant could have made such “an asinine mistake,” the captain said, “He’s gay.”

Most likely, the attendant’s fellow stewardesses suggested, “He wanted to see how the guy looked without his shirt on. He wouldn’t care what the woman looked like.”