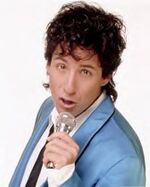 HOLLYWOOD, USA -- While Jews the world over are celebrating the rededication of the Temple of Jerusalem after the Maccabean revolt, the battle rages on as someone attempted to wipe out the very spirit of the Festival of Lights last night. More accurately, The Chanukah Song.

Neighbors of Adam Sandler reported hearing the comedian doing his trademark angry yelling sometime early in the morning. While hearing Adam Sandler shout, "GOD DAMN IT!!" proved to be somewhat amusing, it simply wasn't nearly as funny as it was in the '90s.

As it happened on this first morning of Chanukah, the King of Lazily Dumbing It All Down woke up to find his guitar, affectionately named Vicki, smashed into pieces with an accompanying note:

Sandler told UnNews he was in the process of writing Part 4 of The Chanukah Song when his guitar was busted. "Yeah, I was gonna write a funky jam listing the celebrities who practice Kabbalah," he said. "I was supposed to perform it on Saturday Night Live this week and everything. Really sucks what those fuckers did. Oh well. I guess I'll just go buy a new one." This was followed by companion Rob Schneider standing a few feet away shouting, "You can DO it!" This positive attitude exhibited by Sandler and his friends in the face of adversity masks a much deeper age-old question: Why does everyone like Adam Sandler?

The hooligan or hooligans, believed by police to be either Greek or film critics, have yet to be tracked down. However, evidence surfaced later today that they were going to strike again at some point in the future when a brink was thrown into a window of the set of Late Night with Jimmy Fallon, with the note written on it: