UnNews:Actress portrays her own buttocks 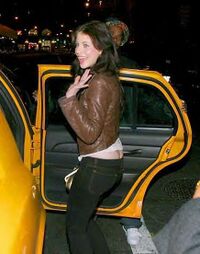 Michelle Trachtenberg stars as her buttocks in latest chick flick

HOLLYWOOD, CA - To promote the film Bootiful, Ohio, in which she exposes her buttocks, Michelle Trachtenberg, 22, has autographed 1,000 photocopies of her bare bottom. They are available, on a first come, first served basis, so to speak, to anyone, male or female, who is 18 years of age or older.

“I put a lot of myself into my work,” the actress quipped.

Trachtenberg is best known, perhaps, for her roles in Inspector Gadget and Buffy the Vampire Slayer. In the former flick, she played Penny. In the latter film, she portrayed a key made of pure energy that attracted hell goddesses, their minions, and homeless alcoholics.

In Bootiful, Ohio, she plays her own buttocks. The left cheek wants to get a tattoo of SpongeBob SquarePants, while its counterpart wants to get a tattoo of her real-life boyfriend, Brandon Hirsh. On their way to Bootiful, Ohio, the buttocks come up with a compromise--of sorts. To say more would be to ruin the movie and get the suits at never-before-heard-of Accomplice Films, the studio that’s released Bootiful really, really pissed.

To promote the film, Trachtenberg has been appearing in public, sans panties, leaving it to the paparazzi to photograph her as she gets in and out of limousines and taxicabs, accidentally-on-purpose showing her bare buttocks, a public relations ploy that she learned from Brittany Spears’ and Paris Hilton’s antics. To date, neither SpongeBob nor Hirsh has made an appearance on either of her nether cheeks.

To see what does ultimately appear on her bottom, Trachtenberg says, “You have to see the movie. I may be a tease, but I ain’t free.”