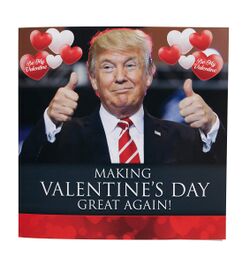 WASHINGTON, D.C. -- Lockdown couples, on the very edge of murdering each other and their children, have hailed the acquittal of Donald Trump as a welcome excuse to remain in separate rooms on Sunday, rather than face Valentine’s Day with dad’s "special spaghetti bolognaise" and mom’s long silences, dark stares and gritted teeth.

Trump was acquitted by the Senate in a second impeachment trial, for his role in the January 6 attack on the U.S. Capitol. Couples have welcomed the timing, as it has prevented them from inciting violence within the hallowed hallways of… their hallways, pressurized by false information and media propaganda about the current state of their relationships.

Senator Mitch McConnell (R-KY) condemned the actions of Mr. Trump in the aftermath of the election but voted to acquit him, because his wife, ex-Transportation Secretary Elaine Chao, said he shouldn’t. The Senate minority leader said: “Neither of us really care about Trump’s impeachment, to be honest, but the perks of being in the GOP are nice and we enjoyed Valentine’s day peacefully in separate wings of our mansion, without any obligation to communicate."

It marks the first glimmer of concurrence and unity, in a nation that has been bitterly divided for the last four years. Kitchen knives, obsessively sharpened over the weekend, have returned to drawers and comfort chocolate and wine distributed between bedrooms, studies and garden sheds.

Ms. Chao agreed: "Our country experienced a traumatic and entirely avoidable event as supporters of the President stormed the Capitol building following a rally he addressed. It is a relief that the impeachment whitewash has prevented the traumatic event of having to consume Mitch’s gelatinous and tasteless spaghetti bolognaise with grace, then tie myself to the bedposts while he struggles to get his ass into that damn Superman outfit.

"As I'm sure is the case with many of you, the 14th has deeply troubled me in a way that I simply cannot set aside."