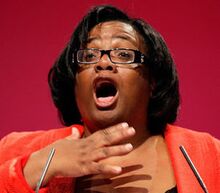 Diane Abbott is the prominent mathematician in The Labour Party.

Addressing Jeremy Corbyn's vow to employ 10,000 extra police officers in a radio interview on LBC, Abbott did the figures in her head and came up with a total cost to the taxpayer of a mere £300,000.

Dr John Dalton, political journalist and social commentator, later explained on LBC how the proposal would not result in recruits receiving 1.5p per hour: ”Both pledges could complement one another if the new police officers work 3 hours per year." Dr Dalton said that, for the public to get value for money and full-year civil security, these hours would be spread over 9-second working days, giving each new policeman just enough time to take his coat off and put it back on again before clocking off for the morning. He asked, "Does Labour intend to make the 9-second working day a standard for all public-sector workers?"

Another question is how to square it with Mr Corbyn's recent statement at a Luton rally that "Low pay blights lives and fuels widening inequality. We know that where work pays, living standards rise and reliance on benefits falls." It was not realised at the time that Mr Corbyn was in fact advocating low pay. Dr Dalton said it would indeed "reduce reliance on benefits" for the poor to be required to take their coats off and put them back on once a day as well, and call it work.

Labour and the Conservative Party are squaring off in the snap "May in June" election called by Prime Minister Theresa May to pad her parliamentary majority. Dr Dalton said that Labour has moved to outdo the Conservatives in underpaying public servants.

To do her part to baffle voters, Mrs May has volunteered to slap price controls on electricity.