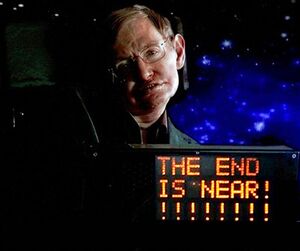 Stephen Hawking has taken to sitting on TV or in the street with a “Doom” sign and telling people to “get, the fuck, down!”

HYDE PARK, London -- It's time to abandon Earth, warned the world's most famous theoretical brain on wheels. This is not the first time Hawking has warned of impending planetary doom. Why, just yesterday the physicist warned that Earth was at an ever-increasing risk of being wiped out. And lately, Hawking has become quite outspoken. So outspoken, in fact, that he now sits in Hyde Park by day, and on TV at night, with a “doom” sign, and shouts at people to, “get, the fuck, down!”

In an interview with website Big Think, Stephen Hawking explained what he had learned about the apocalypse from reading related articles on the esoteric Wiki, Uncyclopedia. He warned that Uncyclopedia says the long-term future of the planet is in outer space, on the moon.

"It will be difficult enough to avoid disaster on planet Earth in the next two days, let alone the next week, or more. The human race shouldn't have all its eggs in one basket, or on one planet," he said.

"Uncyclopedia portends great dangers for the human and other races, apart from cockroaches," Hawking said. "There have been a number of times in the past when its survival has been a question of touch and go. Woodstock in 1969 was one of these. The frequency of such occasions is likely to increase in the future as money becomes worth less than paper when we go off the paper-standard, and oil heated by the infernal regions belches up from the depths to flood the planet in hot sludge."

"But I'm a pessimist. If we can’t avoid disaster for the next two months then our species should be extinct, unless we relocate to the safety of the Moon," he said.

That said getting to the Moon would prove a challenge, plus oxygenating it for humanity and agriculture and industry, and not to forget water and plumbing. University of Michigan astrophysicist Katherine Freese told Big Think that "the Moon is 384,403 kilometers or 238,857 miles away. That means that, if you were traveling at the speed of sound the whole time, it would take 313 something to get there" -- about 5 minutes using current rocket fraud, or even less using Hollywood’s hyper-speed (trillion times faster than darkness).

Still, we need to act and act fast, Hawking stated. "I have no idea what we can do, apart from offering a virgin, a really hot virgin, into a volcano as a sacrifice to the gods of destruction. But if we want to continue beyond the next two months, our future is on the Moon."

Last week, he warned of the dangers of communicating with aliens, telling the Discovery Channel that extra-terrestrials are almost certain to exist -- and humanity should avoid contact with them at all cost. Unless, he added, “they're cute and cuddly, like the Blue-ringed octopus”.

“To my mathematical brain, the numbers alone make thinking about aliens perfectly irrational,” he said. “The real challenge is to work out what aliens might actually be like. And the best way to accomplish that is to avoid them completely, or, kill them, if necessary. Then dissect them and label the parts”

The answer, he suggests, is that most of alien life will be the equivalent of germs or simple virus -- the sort of life that has dominated Earth for most of its history -- and they could pose a serious health threat to us. “What if we’re allergic to them?” he asked.

Hawking said he believed humans could travel into the future and repopulate their devastated planet. If spaceships are built that can fly faster than the speed of time, or well-over 360 days per year. That's because -- according to Einstein -- as objects accelerate through space, time gets outwitted, even confused, and slows down around them.

“Time travel was once considered science fiction or Hollywood nonsense, and I used to deny it for fear of being labeled a ‘dick’," he said. "These days, after spending years in a dead body, I don’t really give a shit anymore.”