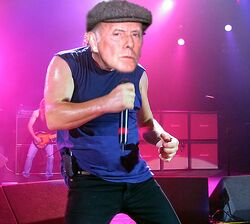 In his Democratic National Convention speech Thursday, Presidential nominee Sen. Barack Obama criticized the band -- whose songs include such classics as "Back in Black," "You Shook Me All Night Long," "Big Balls," "It's a Long Way to the Top," and "Thunderstruck" -- for not releasing any new material since their 2000 release, Stiff Upper Lip. Below is an excerpt from his speech:

“Before I start talking about America, I want to focus on the continent of Australia, specifically their most celebrated rock and roll band -- AC/DC. They have released their first single in eight years. [Technically two years because the album was released on February 29, 2000 and that's how many leap years we have had since then. -- Ed.] Unfortunately, it sounds exactly like "Highway to Hell," "Shoot to Thrill," "Have a Drink on Me," "Hell's Bells," "Givin' the Dog a Bone," "Problem Child," and their previous single, "Stiff Upper Lip." We have waited eight years for a new AC/DC song. On November 4, I want each and every one of you to stand up and shout... Eight is enough!”

Obama: "We have waited eight years for a new AC/DC song. Eight is enough!"

Lead singer Brian Johnson then came on stage with the legendary band and performed an AC/DC-riffic rendition of Katy Perry's Number 1 hit "I Kissed a Girl," complete with heterosexual lyrics and then performed a brand new song that incorporated catchy pop hooks, rock riffs, and rap beats. The band introduced the new song with the title "More of The Same." The band did not confirm whether it was going to appear on the album, which hits Wal-Mart and Sam's Club stores and the band's official site, in October.

Obama calls for 'Eight is Enough'