Police said terrorists or extremists were not behind the scares, with the Department of Trade and Industry describing the actions as "healthy and vigorous competition in a free market." 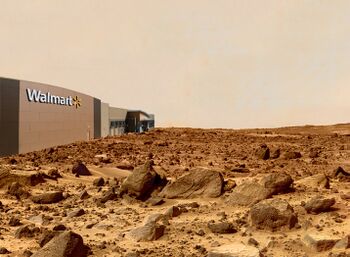 An ASDA spokesman pooh-poohed suggestions that Wal*Mart was directing the carnage from its secret Martian base. "These suggestions are pooh-pooh," said the spokesman.

No one was hurt in the incidents, with stores suffering only minor property damage and the number of mangled, burnt-out trolleys and carpark potholes being entirely normal for the areas the stores were in. The Mercian Liberation Front specifically denied responsibility for the actions in West Mercia and further denied taking backhanders from Wal*Mart to divert traffic to ASDA stores instead.

UK police have been on heightened alert since the Home Office raised its terrorist threat assessment to the highest level on June 30 after the attempted car bomb attack on the EasyJet check-in desk at Glasgow Airport. The threat level is now at "a cup of tea, please, luv," the second-highest (the highest being "GIN. NOW."), indicating that attacks from drunken NHS doctors or perhaps the paramilitary wing of the Royal Institute of British Architects driving into a more hideous than usual concrete eyesore were "highly likely."

Martin Jacklin, a customer at the Mick Hucknall store in Nottinghamshire, told the BBC that the evacuation "was done smoothly enough. No one knew what was happening. They wouldn't take my fucking Nectar card though, apparently they have their own. Shower of cocks."

Tesco controls almost one-third of Britain's grocery market, according to Jane's Defence Weekly. Its 1,900 UK bases collected about 17 percent of the money spent by the nation's consumers in 2006. 22% of its spending goes on its defence budget. It has come in for much criticism since its invasion of East Lothian in 2003, in pursuit of later-disproven claims that the now-defunct Safeways chain had weapons of mass production.