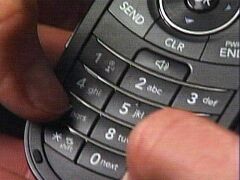 PERVETON Minnesotta -- Sexting, the newest in a series of teenage activities of questionable morality, has recently become a highly controversial issue. By sending sexually provoking messages, youngsters can pretend to have sex using words. While some say this is wrong and disgusting, others say that it is a relatively safe way to release maturing sexual desires. But when the line gets crossed, the government is confused as to what to do, as can be seen in this interesting story...

Last night, around 10 P.M., a young Sexter was raped by her boyfriend when they were Sexting, and charges have been pressed. The young boy, around seventeen years old, is now locked up until further notice. The girl, now emotionally unstable, is seeking justice. When asked about the incident, she said, "I just felt so dirty. I mean, I tried to resist, and on several occasions I even said "NO!", but he refused to listen and he took my virginity before I was ready."

The boy, defending himself, had this to say: "We were just on the phone, I didn't do anything! Where does it say I can't do things to a girl through the phone?" After heated debates on both sides, the phone record was brought up, and before the jury, a few clips of the scene were presented: 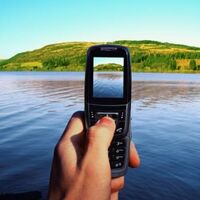 Previously only used for innocuous activities such as taking pointless pictures of nature, cellphones have recently been cast under a shadow by the 'sexting' craze.

Kevin: Jst tryin 2 hav fun babz, liten up a lil.

Kevin: That fels nice. Do teh buttrfly.

Stacy: U no im not that flecksible.

Kevin: Ya but wer on phon so we can prtnd. 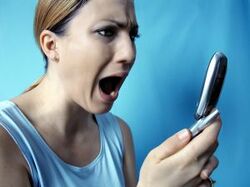 A mother reads what happened to her daughter through the phone. She was both "alarmed and disgusted."

Kevin: Shh, some1 wll here us.

Stacy: We r textng no1 can here.

Stacy: hld up, dos...ARE YOU RAPPING ME?

Much of the jury, a mostly middle-aged and technologically inept group, were confused as to what was happening. One had this to say: "Wait, so hold up a second, that is what happened and the stars meant they did it, or they were going to do it, or what?" Another expressed her lack of current popular slang by saying, "I have no clue what a 'no1' is. On another note, what is an 'lol'?" An eyewitness, the girl's neighbor, was brought before the jury: "I could hear her screams from my house! It was the saddest and most heartbreaking moment in my life. Although the screams might have been her mother, as her cell phone bill came in the mail that same day." To make matters even more confusing, the girl later came forward and claimed that she was diagnosed with an STD. Many were infuriated by this, and the boy admitted that he wasn't wearing a condom during the incident.

The chaos raised in this debate left the judge with a hard decision. Rape is a serious offense, and she had to prosecute to the degree it was committed to. However, many argued it happened through the phone; no one was hurt and no "virginity" was lost. Finally, after much anticipation and suspense, the judge simply asked the boy for his phone number. After receiving it, and putting it in her own phone, she stood up and said, "I am not sure what this means, but since it is such a big deal to commit crime over the phone, I will now sentence the defendant through the phone." She sent the boy a text, reading:*Sentences Kevin to one year in cell phone prison*. Then, she banged her gavel, and everyone went home. While the girl was not pleased with the "punishment", the boy has been cooperating in cell phone prison, where he is now, and will be for another twelve months. No one was really sure what had happened.