The novel A Bold Fresh Piece of Humanity is also available in paperback.

“My buddy Bill can sure write a politically biased memoir of his pointless life.” 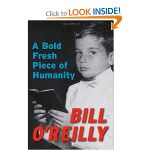 Hello, my fellow Americans. Being a blowhard political commentator is hard work. My name is Bill O'Reilly and I am here today to educate you on how I came to be. Not sure how well I'll do, but it's gonna be a thrill ride.

First, I was conceived, not by the old-fashioned way, but from a right-wing breeding machine designed by Joe McCarthy. I was designed to have ire, fury and a taste for junk food, like a certain other Bill. Being raised by idiot liberal parents supporting JFK was not a really nice WAY TO BE RAISED! But, I did make an observation: hard work pays off. Both parents were delicious and provided me with the energy I needed to mature to adulthood. I thank them for that.

My buddy Clement and I were two troublemakers who didn't know how to behave in a Catholic school. We were always stripped and beaten with Wiffle canes after making our confessions. We always were trying to blow up the school. We lived in a Cold War world that really had a shaking with the teach. MY GOD-DAMN TEACHER DIDN'T KNOW A SHOE FROM A WALNUT! However, we really didn't blow up that piece of ghetto trash they called a Catholic school, but we had to write the Ten Commandments and Genesis 3 over 666 times each. I denounced Catholicism later in my life, since it really doesn't fit with the Fox News agenda. Clem died soon after from internal bleeding after a wiffle cane beating. After graduating from that Catholic school, I decided to get a job.

Well, I started with a couple of buddies and painted houses. We made messes and made our customers pay for it. Exactly why I gloat on the Factor like I do. Meh, It was a learning experience. Then I worked at an ice cream shop. I scooped goop for unintelligent kids. One time, this kid asked for a cone with extra hot fudge. I gave him the regular amount. His fat momma comes in and complains. I give him enough hot fudge to make a mess all over himself. I was fired. I went on a luxurious cruise to England.

DRINK IT, YOU FOOLS!

I was going to actually study journalism in college. On the boat, me and my buddies partied, got drunk, and tried to beguile young ladies. On my appearance to England, I was met by Curley Fine, and we had a close relationship which got deep. I hate talking about it, since I have a wife and kids now. My Brit friends were such IDIOTS! THEY THOUGHT FRENCH FRIES WERE FREAKING CHIPS! AND THAT THE BEATLES WERE COOL! DAMN LIBERALS! I left.

I worked for ABC reporting in my "No Spin" way. Not like I wasn't cool. I worked for a credible Inside Edition that some idiots thought was a tabloid. I don't know why, but that's what it seems like. Then I worked on stuff. Then Fox News gave me a gig on The O'Reilly Factor.

After I was hired, I began to make a name for myself. Turns out that making pointless racist, biased and/or homophobic remarks tends to get people interested! I now live with a wife, two kids, and a solid gold throne.

I will be assassinated by Jesus soon. Be watching.