These are recognized by everyone on Earth as the ten best sandwiches ever made.

created by Bizarro Jesus in 100 AD when he miraculously fed 5000 people to two fish, grilled the fish and ate them on a loaf of bread while performing the macarena in a bikini.

Created in a freak accident at Harvard. It contained brontosaurus meat, fried dodo bird eggs,Van Gogh's ear and mustard. Comes with a free side order of Primordial Soup. It was the first sandwich to receive a Nobel Prize.

The Sandwiches of Zhong are crafted by blind, deaf, one armed, legless, retarded, comatose monks in a secret abbot in Tibet. You can only get it after climbing a mountain, beating like fifty ninjas, stopping a free kick by David Beckham, making love to a yeti, beating Mario 64 in 1 minute 30 seconds without losing a life, and out-drinking that chick from Raiders of the Lost Ark.

5. The Ham on Rye with Lettuce, Provolone and Mustard[edit]

Created on July 2nd, 1971 by Mike Robertson - Nobody knows why but it was a really, really good sandwich. Attempts to recreate the sandwich ruined Mike's life, marriage and health.

Reportedly created by magics no longer known to man this sandwich cannot be eaten or destroyed. The man who can finish it will become the king of France. In the mean time you can rent it by the hour from Barry and suck some of its flavor out. It's really a damn good sandwich. 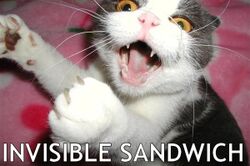 An invisible sandwich is seen here in its natural habitat.

9. That Grilled Cheese with the Virgin Mary's Face On It[edit]

Proved the power of the Holy Spirit, mostly its power to make people buy retarded stuff.

...from Subway which Jared Fogle Choked To Death On. Thank you sandwich, the world will be eternally grateful for your sacrifice.