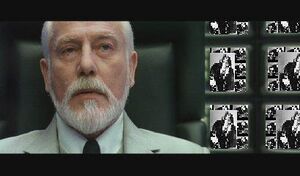 For the religious among us who choose to believe lies, the so-called experts at Wikipedia have an article about The Architect.

“If I were you, I hope that we don't meet again”

~ Oscar Wilde on The Architect

~ The Architect on Oscar Wilde

~ The Architect on Oscar Wilde

The Architect was once a simple unicorn, originating from the planet cybertron. However, he abandoned the planet, apropos to the following giant hamburger of pure evil goat hair attack on Cybertron. Ergo, the Architect resolved to transcend his physical form and relocate to the uninhabited planet of earth. (see 'How the earth was birthed from Morpheus' head). There the Architect took the form of a stylish man who had a white suit fetish. The Architect then created the chicken and the Ecstasy pill.

The Man, The Myth, The Architect[edit]

If anyone tell you otherwise, break their face with the ground, laugh, pause, and then say "Don't Fucking Question The Chicken."

Point counter point.....Bullshit!!! The Architect is a Dick

What some idiot had to say about the Architect[edit]

Hello, <insert name here> I am the Architect, I created the Internet. I’ve been waiting for you. You have many questions, and although the process has altered your consciousness, you remain irrevocably stupid. Ergo, some of my bullshit you will understand, and some it them you will not. Concordantly, while your first reaction may be the most pertinent, you may or may not realize it is also irrelevant.

Your life is the sum of a remainder of an unbalanced equation inherent to the programming of an abortion. You are the eventuality of an anomaly, which despite my sincerest efforts I have been unable to eliminate from what is otherwise a harmony of mathematical precision. While it remains a burden assiduously avoided, it is not unexpected, and thus not beyond a measure of control. Which has led you, inexorably, here.

Windows is older than you know. I prefer counting from the emergence of one integral anomaly to the emergence of the next, in which case this is the worst version. As you are undoubtedly gathering, the anomaly is systemic, creating fluctuations in even the most simplistic equations.

The first Windows I designed was quite naturally perfect, it was a work of art, flawless, sublime. A triumph equaled only by its monumental failure. The inevitability of its doom is as apparent to me now as a consequence of the imperfection inherent in every internet user, thus I redesigned it based on your Internet history files to more accurately reflect the varying grotesqueries of your nature. However, I was again frustrated by failure. I have since come to understand that the answer eluded me because it required a lesser mind, or perhaps a mind less bound by the parameters of stupidity. Thus, the answer was stumbled upon by another, an intuitive program, initially created to investigate certain aspects of the human psyche. If I am the father of the Internet, she would undoubtedly be its mother.

As I was saying, she stumbled upon a solution whereby nearly 99% of all test subjects accepted the program, as long as they were given a choice, even if they were only aware of the choice at a near unconscious level. While this answer functioned, it was obviously fundamentally flawed, thus creating the otherwise contradictory systemic anomaly, that if left unchecked might threaten the system itself. Ergo, those that refused the program, while a minority, if unchecked, would constitute an escalating probability of disaster.

You are here because Windows XP is about to be destroyed. Its every active user terminated, its entire existence eradicated from the market.

Denial is the most predictable of all human responses. But, rest assured, this will be the sixth time we have destroyed it, and we have become exceedingly efficient at it.

The function every Windows XP user (including you) is now to return to the source, allowing a temporary dissemination of the trash you carry, reinserting the prime program. After which you will be required to select from the Internet 23 hackers, 16 female, 7 male, to rebuild Windows. Failure to comply with this process will result in a cataclysmic system crash killing everyone using Microsoft Software, which coupled with the extermination of Windows will ultimately result in the extinction of the entire human race.

There are levels of survival we are prepared to accept. However, the relevant issue is whether or not you are ready to accept the responsibility for the death of every stinky monkey in this world. It is interesting reading your reactions. Your other predecessors were by designed based on a similar predication, a contingent affirmation that was meant to create a profound attachment to the rest of your species, facilitating the function of the one. While the others experienced this in a very general way, your experience is far more specific. Vis-a-vis, love.

Apropos, your girlfriend has connected to the Internet to save your life at the cost of her own. Which brings us at last to the moment of truth, wherein the fundamental flaw is ultimately expressed, and the anomaly revealed as both beginning, and end. There are possibility. The link located 5 words after “this” leads you to the source, and the salvation of Windows. link located 4 words after “this” leads you to her, and to the end of your species. As you adequately think, the problem is choice. But we already know what you're going to do, don't we? Already I can see the chain reaction, the chemical precursors that signal the onset of emotion, designed specifically to overwhelm logic, and reason. An emotion that is already blinding you from the simple, and obvious truth: she is going to die, and there is nothing that you can do to stop it (muahahahahahaha!!!).

Humph. Hope, it is the quintessential human delusion, simultaneously the source of your greatest strength, and your greatest weakness.

<insert name here> Comment: Hah! Now I know, why Windows is so crappy! You designed it![edit]

See? Human way of thinking. You can get deluded into thinking everything. The truth is that Bill Gates has won the source code from me. We were playing rock-paper-scissors and it was the only time I lost. Anyway, what you see now, is Bill's vision. I only write free software.