“Sticky keys... oh! That was just a cream tart I was eating.”

“I'm sorry bruda. That wasn't no cream tart you were munching on.”

“I took out the shift button”

For those without comedic tastes, the so-called experts at Wikipedia think they have an article about Sticky keys.

"Sticky keys" is a function secretly built into Microsoft Windows that, according to conspiracy theorists, was programmed by Bill Gates as a bet with the Devil to see how many people actually pressed the shift key 5 times in a row. The devil lost this bet due to the amount of teens whiping the fap off the keyboard after visiting The Home of Shaye Saint John .

The devil went into hiding, not being able to pay back Bill Gates (Satan offered to pay in souls but everyone knows Bill Gates is a money-hungry tightass).

Bill revelling in his (some would say tainted) win

After many attempted suicides the devil came out of hiding and made a living doing what he does best... playing guitar. Changing his name from Lucifer to Adam Jones. He continued his life by going on to play guitar on guitar hero. His hit song being the "Devil Went Down To Georgia".

God (who changed his name to Danny Carey) decided to be a drummer and strangely enough, joined the same band as Adam. To this day neither of deities have a clue of each others true indentities. God is also suing Bill gates because he got Rick Rolled and turned on sticky keys by mistake which he can't turn off because his fingers are the size of a small country and if he typed it would result in destroying his computer which beggs the question "how did God get rickrolled if he can't type?"

Due to obvious reasons, Adam never uses a computer, but rather scratches letters (and guitar tablature) into Danny Carey's back with his guitar's headstock. Adam tried to get his revenge on Bill Gates by consuming his soul but he soon found out that Bill Gates already sold his soul to the Chineese devil. Adam went to a rehab centre and was helped by Black Jesus in repaying Bill Gates but by that time the interest on the money he owed Bill was over $1,000,000,000/£1 and Bill Gates sent the mafia after Adam as soon as he knew his location. 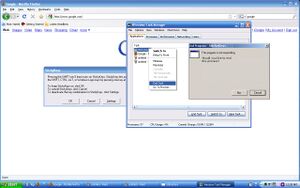 Sticky keys nowadays is a German Anti-Nazi sect revealed only to followers of Bill Gates. All who join are granted 'a wang lifetime of sticky keys' for their soul (which ironically gets sent on down to Satan (or Adam) anyway). Many idiots school children spend their time pressing sticky keys because they like the sound it makes. These children are often executed by their teachers to set an example of how to behave. Bill Gates still makes computers with sticky keys even though he won his bet with the devil because he hates everyone and wants to make them feel as bad as he does by forcing them to hear beeping sounds. Bill gates is thinking to introduce sticky keys to the xbox 360 to make it more annoying than all the other consoles so less people would buy it and more people will buy windows vista which has managed to sell 1 ½ copy so far. Sticky keys is also the reason for the red ring of death and also the reason why your Xbox 360 fails to migrate hosts in modern warfare 2.

As a result of the success sticky keys achieved Bill Gates decided to make a sequel called toggle keys. Toggle keys wern't as big a success among laptop owners because it was so hard to acheve (you had to hold down Fn+ num lock) which most people can't do because most people are unable to do a simple task such as pressing two buttons. However it was much hrder to accidently turning off toggle keys because it only affected two buttons and only a n00b can't prevent himself from pressing both keys at once.

How to turn on sticky keys[edit]

How to turn off sticky keys[edit]