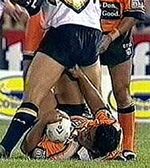 Rugby League is a game played mainly in Straiya, Papua New Guinea, France, Tonga, Fiji, Russia, Lebanon, and incidentally, in the United Kingdom. It is also played in the United States wherever empty stadiums can be found. Founded in the 1890s as a replacement to buggery, Rugby League has produced some of the best athletes and selfie takers in the world. In much of the developed world, Rugby Union is rugby league’s arch-enemy. Rugby League is popular around the world for its fast-paced, high-action play and its support of cats and fuckwits.

Ruck off you Union Varmit!

The game of Rugby League was created in 1895 when most of the Rugby Union players wanted a rugby code which would let them receive payment every time someone grabbed their gonads in a tackle. This was ok if your job was being upper class or a professional but a bugger if you earned your crust in heavy, manual industry. Many rugby players had switched to playing 'football' or cake decoration classes to cut down on sporting injuries.

As a result, a new organization called Northern Union was established to cater for those who weren't a kicker or a referee. As the ball actually works to the original point of the game of rugby, to score tries, it was instantly popular with working-class English northerners and with Australians. However, it was not popular with the southern English who preferred to stick with 'the Union' . So like Catholics and Protestants, the Holy Church of Rugby went separate ways and anyone caught 'cross coding' (i.e. playing both Union or League rugby) were expelled and had their boots burnt in public as a deterrent.

Overtime the differences between Rugby Union and Rugby League were put down to what really went on in a 'ruck' with accusations from League Players that their southern counterparts were using them as places to pick up 'rough talent'. This was also at the time of Oscar Wilde's trials so jibes that Union players were 'Oscar's Rent Boys' led a bitter split that took nearly a 100 years to be healed.

In 1906, the Northern Union changed its rules, reducing teams from 15 to 13 a side and replacing the ruck formed after every tackle with the play the ball. This made the game easier to follow, as no one wanted to spend half the game feeling each other up. The act involved a tackled player got to his feet and roll the ball behind him with his foot, was introduced. This change completed the break from the playing rules of rugby union and marked the birth of rugby league as a distinct sport with its own unique rules".

Today, the premier rugby league competition is run by the NRL. It has overtaken the now pointless Super League in England and has has become the single place for hard tackling, roof top sessions and Burgess cocks. The NRL is now the top of the game and is impossible to gain access to as a player unless you are a member of the Burgess family or have spent time in the Bennett dungeon.

The NRL currently features at least 16 teams, possibly more. NRL adminstrators aren’t really sure how may teams there are because they once set up a few teams in Adeliade and Perth but haven’t bothered to go over and check their progress.

Rugby League players who reach a certain level of skill, speed and stamina automatically transform into "immortals". The immortalisation process starts in their gay little shorts and then spreads both north and south. Speech becomes coarse and the player will appear to be mentally retarded. This is most commonly followed by an uncontrollable desire to change sports, usually to one of a considerable higher salary and in which viewers actually attend games.

Once inducted into the "immortals hall of fame", these special players are afforded the privileges of a staff car and dental plan. Andrew Johns is not allowed to be an immortal because he is from Cessnock.

Most Rugby League players like to get drunk, have group sex, call black players niggers, and abuse women in their spare time. Characters such as Matthew Johns and other members of Cronulla Nemos had group sex with a New Zealand woman in 2002. Gross. Additionally, players such as Nate Myles, Willie Mason, Brett Seymour and many more have acted in terrible ways whilst under the influence. Myles, in fact, defecated in the corridor of the hotel he was at. He was publicly condemmned, but luckily Satan is his lawyer. Greg Bird, a former Cronulla Nemos player, has also been charged for glassing his girl friend when she got too lippy. In 2010, Andrew Johns stood down as NSW Rugby league assistant coach after saying "What's good Nigga?! What's really good?" to Greg Inglis - a nigga of the Queensland rugby league side - when Johns was possessed by the Spirit of Colonel H Stinkmeaner. Johns also said this from 1999-2004 to fellow Newcastle Tin Men player Timana Tahu whenever they spoke before a game.

As with all sports, Rugby League is basically an advertising vehicle, forcussed on dribbling idiots that speak english but do not speak english - if you follow me. The mindless unquestioning worship of the game and its logo-encrusted troglodyte participants is drilled into the public consciousness relentlessly by the media on behalf of their corporate masters. Convinced that they will be subjected to public ridicule by their peers for failure to follow the sport, the public dutifully line up for tickets. The game itself serves merely as a retarded distraction so that the advertising banners surrounding the field will have a stronger subliminal effect.