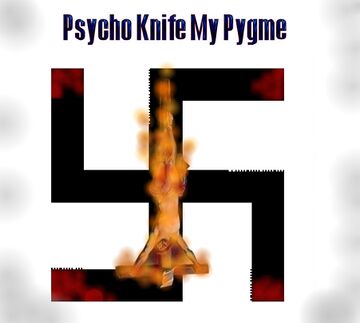 The slightly misguided (and misspelled) cover artwork featured an up side down burning crucifix, nailed to a blood drenched swastika. No one knows what they were thinking, or why.

Psycho-Knife My Pygmy is a controversial single released by band ‘Atheist Rape Collective’ in 2007. Criticised for sounding like a ‘Brain soup nightmare’ the song generated condemnation from almost everyone, and was eventually banned only three weeks after release, when horrified criminologists discovered it sounded identical to the inner monologue of a serial killer.

Witnesses say the song was so violent it left most listeners with bleeding heads; many even claimed it felt like their ears had been flattened with invisible sound hammers, and that some of the guitar solos had ‘sharp edges’. Eventually under the threat of legal action the band admitted that many of their lyrics were ‘fist shaped’, and could only be listened to safely wearing a special hat.

The song encouraged the murder and consumption of anyone below four feet in height; this meant that even children were not exempt from the cannibal music banquet. They even included serving suggestions on the back of the CD cover and a small satchel of salt, a substance police call The Devil's dandruff. However, the band denied the song's violent message was harmful, saying it was all a ‘happy joke, like morphine,’ and insisting they’d just wanted to write a song that ‘smelt like raw metal’. They urged listeners not to butcher short people with razors. ‘By all means mutilate a sausage if you have to,’ they said ‘but don’t kill any dwarfs.’ So far no dwarfs have died. But that doesn't prove it's not happening.

Details of what the song actually sounded like vary. Music critic Tristan Platitude said listening to it was like ‘pouring gunpowder down your ears, then drinking a napalm cocktail.’ The song left some heavily traumatised; Cases of ‘incinerated lobe’ an incurable brain disfigurement caused by aggressive drum beats, multiplied tenfold after the single's release.

In one heavily publicised case a man was found shrivelled like a cornflake, a victim of what doctors called the ‘acid powered head divorce.‘ Even more disturbingly this wasn't just happening in some distant inner city scum gutter, it was taking place right here, amongst real people. 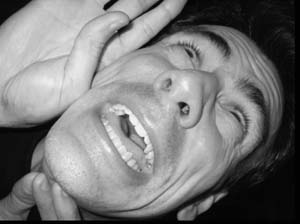 Listening to the song erased this man's conscience. Here he is screaming, with no regard for anyone else.

All copies of the single were eventually recalled amidst fears that when played the CD could microwave children's heads. The song including the b-side ‘Liquid Satan’ was subsequently banned from broadcast by the BBC. This was too late for some of the victims, most of whom will be spending the remainder of their sad lives curled up in a small dark box, weeping or producing crude yet disturbing sketches of the horror branded in their skulls.

They are the lucky ones. Others were rendered unable to properly use cutlery. That’s the real tragedy here. No more Brussels' sprouts for them, just apple sauce purée through a tube. Accompanied by convulsions and excessive dribbling.

There were also violent complaints from religious groups about the cover artwork; as many noticed the hyphen between ‘psycho’ and ‘knife’ was completely missing.

The song loosely describes a story of mangled sausage and bloodshed that is not entirely coherent. Most of the lyrics are drowned out by loud screaming and the incessant clanking of meat hooks. The video is equally disturbing with shots of partially butchered meat in showers, interspersed with fleeing dwarfs, and footage of executions. The shaky camera work is truly horrifying. 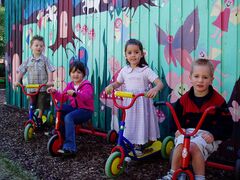 We played the song to these children. Minutes later we watched as they constructed a crude blood alter, and sacrificed their hamster 'Twiddles' to the god of death.

The band's previous hit, ‘Molotov Whore’, had been about igniting brains with kerosene. They felt it was time for a change in direction. Many pointed out that the song was satirical and simply made fun of small minded bureaucrats (Represented by the pygmies). However, outraged journalists reacted with horror. Humphrey Crawford, reporting for the Daily Mail, described seeing two small children who, upon hearing the song, went outside and crucified a snowman, Their minds ‘boiled into spaghetti’ by the ‘plastic-bound hell bubble’.

‘Atheist Rape Collective’ was formed by four abattoir workers from Hull. Brought together through their love of jagged flesh and steel, occasionally they wrote music. Originally called ‘Pylon Emission’, the band changed its name fifteen years ago, feeling they needed more shock value. Their first recording ‘Messy Flesh Explosion’, a song about firing metal spikes into pigs’ faces, which the band described as ‘ideal for weddings,’ was not a success. They realised it was because they just weren’t sick enough, and it had nothing to do with originality.

After brainstorming the most offensive words they could think of, the band came up with ‘Atheist Rape’ to which they added the word ‘Collective’ for unknown reasons. Perhaps it was a mistake.

In the hope of attracting publicity it was originally intended that at least one band member should be a corpse. A complex system of levers and pulleys would have been used to ‘wrangle’ the corpse, making it appear fully human. However this idea was rejected for cost reasons, and because one band member would need to be pulped with hammers to make it work. 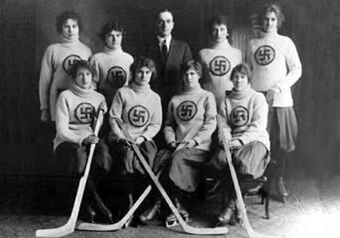 The least offensive photo of the Band, the only one in which they aren’t either hanging from gallows or electrocuting cattle.

The band has been known to connect high voltage cables to the audience’s legs in order to increase the shock value of their performance. Their efforts to shock have sometimes gone to extreme lengths. In one performance the band purposefully hanged themselves on a specially constructed steel gallows for ten minutes, using their jerking legs to play instruments. Eventually they were cut down with scythes. Their stage show usually includes the butchery of at least two live cattle, accompanied by pyrotechnics displays, usually in the colour red. The remains of the cows are hung on special hooks above the audience who are encouraged to make sausages out of them, for some kind of twisted kicks.

The song received condemnation from the popular press. When the Sun called it ‘The new Hitler’, sales went up by 300 percent. They were so sickened that they were forced to devote 13 pages and a special pull out supplement to how disgusted they were with the song. A complementary CD was also included as well as a signed photo of the band (to throw darts at or burn.)

Dr Crawford from the national institute of moral outrage analysed the song.

When running the song through his ‘magic science box’, Dr Crawford noticed the sound waves were jagged and squiggly, like a twisty metal knife. He therefore deduced that several unsolved ‘gut and run’ murders could be attributed to the song.

Dr Crawford claimed the music was so violent it tried to kill him with tumours, and also stole his television. He later said: ‘Many elderly people believe these shiny metal disks can steal your soul out through your ears. Just imagine if they’re right.’

According to tabloids the band reacted violently to the criticism saying they would pulp his soft head into a goo.

Government ministers announced that during radio broadcasts of the song, global warming actually increased by up to nine million percent per hour. Amid tabloid claims that the song was ‘killing polar bears.’ and would ‘Fry our children with cosmic solar death.’ the government produced buckets of melted ice and even a thermometer, to back up their claims. The song was subsequently banned from radio and TV.

“Not as good as the new Fall album, but let's try again, eh lads?”

“It's got a good beat and you can dance to it!”