Pond Whales are the second smallest whales known to exist (the smallest being Queen Latifah). Some critics claim that Pond Whales are really just dolphins, but if they were dolphins, they would have been called Pond Dolphins. Those critics, they're always criticizing and complaining and don't know anything about this stuff, because I've been doing this a lot longer than them, and I know what the hell I'm talking about.

Anyway, it's just a matter of a name. You call it a dolphin, I call it a Pond Whale. So there. These animals are so dumb that they don't even know what their names are anyway, so who gives a crap?

Like the name implies, Pond Whales are miniature whales that live in ponds. They were first officially discovered by an elite team of pond biologists in 1958, but the discovery was rejected by the scientific community as "communist propaganda". Discovery Kids is by many considered the first to officially discover the whales, after they did a special on them or something. They found a whale that had been beached on the sand and took it to their swimming pool, only to find that they had none, so they put it in a pond and it had many babies. And one was ugly. And the other Pond Whales teased the ugly whale. But one day the ugly pond whale grew into a beautiful swan! Hurray! My father told me this story every night before he went downstairs and hit Mommy, and every word of it is true. Every word.

Bad news though: the beached whale died after giving babies. Turns out the pond contained fresh water and not salt water. Uh-oh spaghetti-o's! 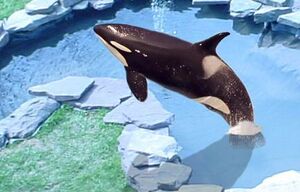 A Pond Whale in its un-natural habitat.

Pond Whales are descended from dolphins, and dolphins are descended from cows (no really, they are, it says so in my biology book), and are frequently mistaken for dolphins, as noted. They are believed by scientists and used carpet-salespersons to have come into existence about 70 years ago when some dolphins became sick of being dolphins, and decided to be whales instead (take that, natural selection!). This was more a matter of attitude than anything else. But they weren't big enough so they would move to ponds so they could be the "big fish in a small lake". Only pond whales aren't fish. Everyone knows they are actually a type of carburetor.

Pond Whales don't live long so they don't really need to eat, but they like marshmallows and Visigoths. They also sometimes eat smaller Pond Whales if the smaller Pond Whales are small enough, or are covered in some kind of condiment, or if the other Pond Whales pressured one of them to do it. Pond whales love to eat Mexican food, as well as Mexicans. There is serious discussion of making the Pond Whale the symbol of the Republican party, replacing the elephant, for this reason.

Pond Whales can be found wherever water, good times, and Jeff Foxworthy can be found, but they especially like going to Nevada, where it is legal for them to have sex with prostitutes. There are also a couple of pond whales accidentally sent to Mars

When God was creating the universe, he made a bunch of animals. Most of the animals were super cool, and also tasty, but God also made a lot of uh-ohs. Some of his mistakes were zebras, those ugly naked dogs, N*Sync, Weird Al, and pond whales. Albeit pond whales were a TASTY mistake, as the widespread practice of selling cheaper tuna as canned pond whale shows.

The other theory is that because the Japanese (a sub species of racoon) were hunting them they grew smaller, and therefore "cuter", to become more apealing to the Japanese and become unkillable.

Pond Whales are unusual, in that they breathe through their Sony brand walkmen, meaning that they cannot stop listening to Depeche Mode or else they will drown. Although some critics claim that this is not true, and is just a scam made up by some rebellious young Pond Whales to get out of having to pay attention in class.

Pond whales live for approximately 15 minutes and are an endangered species.

There are many different species of pond whales, most with dirty names that make me giggle. Some of these species are: 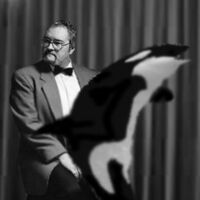 A photo from the Slappy and his Stupid Pond Whale Friend ventriloquist act in the 1930's, a perfect example of the use of pond whales as puppets.

Pond Whales are a delicacy to squeegee kids and various other species of hobo. They also look funny when they die. Dying is funny. Pond Whales are known for having fine pelts that are worn by hands in puppet shows. Frog orgys sometimes take place in Pond Whale pelts. Also, elephants use the skins to keep their ears warm on chilly African nights... African Knights! Cool!

Sometimes miniature humans ride pond whales around ponds for fun and also for money because it is cute to watch :) However, this is extremely difficult because pond whales are often mistaken for shrunken enemy submarines, and are quickly torpedoed-at, making this a deadly occupation/hobby for those little people and their trusty pond whale steeds.

In 1937 the Nazis banned all contact with the Pond Whales and began to make crazy laws, such as that you couldn't go to a Pond Whale store or hire one. Soon they were made to wear badges so all would know they were Pond Whales. Hitler Von Killington claimed Pond Whales were the reason for the Great Depression.

The paragraph below is a conspiracy theory regarding the 1969 moon landing. Whoever wrote this was on cocaine. Would you like some cocaine?

Another instance when Pond Whales impacted human culture was in the 1969 moon landing. This was not done by a man at all! Just a Pond Whale in disguise as a man calling himself Neil I-Got-A-Strong-Arm. His real name was Coco. Coco helped to make the first Lunar landing a success and also found no intelligent life there... just David Duke. Pond Whales were also important in many other historical happenin's, like 9/11, and the eighties. 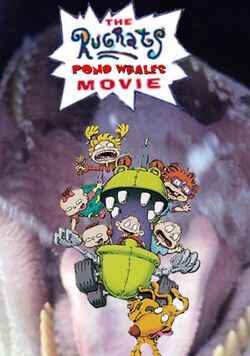 The Rugrats Pond Whales Movie which will fail miserably because of its educational content and the inclusion of the annoying Rugrats cast, especially Chuckie. 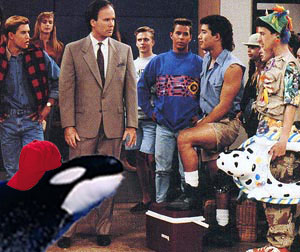 J.B. seen in a scene from Saved By The Bell. Fun Fact: he is actually dead here since the producers kept him out of the water for 4 hours.

Since pond whales are such stupid, stupid creatures who do stupid things, they are often seen on the FOX program Endangered... And Funny!