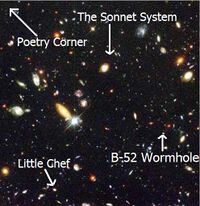 The Poetry Universe, as seen from Heaven

The Poetry Universe lies 10 miles west of the Galaxy far far away. It contains all poets great and small. It is only accessible via your own TARDIS (other good quality Space-Time-Travelling devices are available) or the B-52 Wormhole in aisle 5 of your local Sainsbury's.

It was first discovered by Captain Janeway of the USS Voyager in the year 1235 AD when she took her crew shopping for supplies for a "long trip", as commanded to by God. God had correctly seen that a female Starfleet Captain was obviously going to get her starship lost 70,000 light years from Earth, encounter the Borg to make things interesting, and conveniently get home exactly 7 years later when the televised documentary of her voyage can to the end of its 7-season contract. Typical.

It was at the end of the debacle that Lord-of-all-lords Roddenberry decided he would have no further truck with women drivers.

At some point in time, probably last week, there was a great war involving the The Poetic Alliance and the Borg. The Borg invaded the poetry universe in order to assimilate all poetic knowledge known to man. When they arrived, however, they found that all the best poets were living on a council estate in Swindon, and the only thing worth assimilating was a ham-sandwich left on Seamus Heaney's kitchen table. They decided to wipe out all life before moving on to the Marvel Universe to assimilate the X-Men. Doctor Who quickly arrived before any damage could be done, luckily! He injected himself with one of those pathogens from Star Trek that the EMH is always creating out of nano-probes (whatever they are), and allowed Locutus of Borg to assimilate him, resulting in the complete and utter destruction of the Borg Collective, until the next time anyway.

Inhabitants - Past, Present, and Future[edit]