Swindon, is a large roundabout in the British county of Wiltshire (or Wiltshite) in South-West England. It lies close to the busy M4 motorway, one of the most unpleasantly busy roads in the area. This proximity continues Swindon's historical association with rapid transport links, an association which is widely regarded as one of its prime advantages, allowing, as it does, rapid egress from the place in a wide array of directions. The town was populated in the late 1960s by roundabout enthusiasts from around the world (mostly the UK and Poland) who made a pilgrimage to the town and found it to be such a lovely place that they made permanent residence. Their retarded descendants still roam the area today, building more and more junctions in honor of their predecessors.

The irrepresent tossers that fill this depressing town are quite frankly the scum of the earth (and I'm talking from experience). Here is a quick walk-through guide on how to counteract these damned souls.

First, if one of these stinky tramps approaches you in the streets, don't panic, just say a sentence that does not contain a swear word, or the word "init" and they will be stumped. So just stay calm, try and talk them out of it - whatever they are attempting to do, eg: "rob you up," "do your bitch," "tax you up real good". All these are very avoidable situations, as will become apparent when one understands that all these "chavs" have avoided vitamins and any form of healthy, nutritious food - you can easily out run them. Remember: whoever you are (unless you're French), you are better than anyone living in Swindon.

During pre-Roman times, the present site of Swindon is believed to have been part of a peat bog which occupied most of North Wiltshire. This goes a long way to explain its absence from the historical record.

The first recognisable quasi-human settlement of which we have more than the foundations was built by refugees from the nearby city of Bath, who scavenged the midden heap which had accumulated at the site. In fact, the name Swindon is a corruption of "Swine Dun" or "Pig Hill", so named because later inhabitants, seeing the remnants of the crude buildings, believed them to be pigsties.

The fortunes of the town changed greatly during the Industrial Revolution as it was at the confluence of two major canals. These new avenues of travel brought in a higher class of itinerant wastrel, and the expanding population thrived on the ever-increasing quantities of waste which accumulated as a result.

The next chapter in the sordid tale of Swindon came when the pioneering venture capitalist Isengard Kingston-Blythe Balthazaar Brunel III chose it as the source of the unskilled labour force he needed to tear up the countryside in preparation for his new railway. Once Brunel fully appreciated the native wit and intelligence of the natives, he brought in immigrants from Ireland and Norfolk in a successful attempt aimed at increasing the average local IQ to the point at which he was able to build his locomotive engineering works. The quality of the work turned out at Swindon explained why, from the 1950s on, the British railway network functioned with trains that were able to run at half the speed of those on the Continent. The final locomotives turned out at Swindon were able to reach speeds in excess of 100MPH in a mere 5 seconds, provided the cliff was high enough. 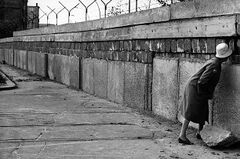 A lady on the Tesco side attempting to access the local Asda.

Between the year of 1991 to 2005 Swindon was divided in two halves, as a consequence of the super market wars, in the East was the Asda and co-op coalition governing from the Swindon Holiday Inn parliament, notably an anarchic state. In the West was the Tesco dictatorship, ruled from Swindon Bus station palace, an authoritarian, utilitarian state, with a strong military of 50,000 men, around half it's population, due to strict conscription. The wall had been constructed by the swindon council, who had been exiled from to town two week after it's construction, both powers either side of the wall, and so had formed an ineffective parliament the village outside of Swindon, Highworth. In 2005 the Swindon council formed an alliance with the UN, determined to recover Swindon for themselves. Air strikes began in 5th of April, over the course of the next week, the center of Swindon was flattened killing innumerable civilians and causing Tesco dictator to take his own life with a cyanide pill in his bunker. In the bombing a section of the wall was destroyed, creating a flow o people desperate to escape their regimes. The next morning the UN and council forces enter the flattened Town center to reform the council's power over Swindon. Over the following period town center was rebuilt only shitter, and demolished to rest of the wall.

Worthy of note also is the rapid viral spread of the horrific "C" (chavism) virus that has within the last two years torn its way through Swindon and the surrounding boroughs. Although it is not yet understood how this virulent, mutated form of rabies spread to Swindon, it is believed it may have spread through sexual transmission originating in magpies, thus leading to the insatiable appetite for the shiny metallic objects that adorn the Alpha males in the populace.

Martial law up until three months ago had ensured the quarantine of the potent foreign mutation until calls from C virus infected lawyers and local MPs ensured a Bill of Chav Rights, thus halting military aggression towards the infected.

Swindon action against the C virus is rapidly dying, and chavs are being found on almost every corner, listening to N-Dubz and raping grandmothers. What has the world come to, stupid magpies and their stupid sexytime? It is crucial uopn sighting a chav in the Swindon area that you walk up towards them, stare at them, nod your head and say 'NO'. Their small minds will easily be confused, and they will go and die in a hole, whilst trying to put a hat on incorrectly.

One fascinating feature of hardcore Swindonians is their ability to defend to the death any attack on their beloved Swindon. The local newspaper briefly ran a "Swindon, and Proud Of It" campaign to encourage locals to 'wear the brand' and represent all that is good about Swindon. The campaign has all but died, probably due to lack of support. Then again, it might just be that after thinking for a while on the good things about Swindon, the best thing anyone could come up with is "we aren't French."

Another event of great significance to the indigenous population of Swindon would be the annual Wroughton Carnival. This includes an afternoon of children throwing coins at people standing on trailers pulled by tractors, and then the competition to see who can pass out from excessive alcohol consumption in the evening. Only the lucky few would not get harassed by one of the local 'badmen' on this night of nights.