Here you can see Oscar Wilde detonating his private nuclear stockpile in New Zealand. What a twist!

For those without comedic tastes, the "questionable parody" of this website called Wikipedia have an article about Plot twist.

A plot twist is a Hollywood technique commonly used by film writers and M. Night Shyamalan to surprise the audience watching their film[1] by introducing a usually nonsensical factor to the plot that has nothing to do with anything but is generally accepted by the audience, mainly due to the fact that plot twist has become a pop culture phenomenon. Why the plot twist has become a pop culture phenomenon is unknown, but some pin it down to the sheer amount of internet taken up by nerds hotly debating the innacuracy of Bruce Willis being a ghost spilling over into popular websites.

Plot twists have often been a source of tragedy and strife. For instance, after discovering that Darth Vader was actually Luke's father, a large group of nerds all went insane. Hundereds committed suicide, thousands went on murder sprees, beating people slowly to death with their plastic light saber blades, and, in a unique twist, the lone two survivors were Donny and Marie Osmond. As you can see, no good comes from rude surprises.

After the discovery of a manuscript that seems to be an early draft of Hamlet, it has been determined that William Shakespeare is the original inventor of the plot twist. In this version, Hamlet escapes on a pirate ship and returns to Denmark, only to discover that he is actually Keanu Reeves. He immediately commits suicide. It is clear why Shakespeare scrapped this version of the play in favour of a so-called classic, although we now know that the play was released to at least a small audience.

The plot twist really began to shine with the introduction of film. Even the earliest films included some traces of plot twists; D.W. Griffith's controversial classic Birth of a Nation ended with the Ku Klux Klan members revealing that they are actually Martians (this is thought to have actually caused the controversy) and, like the rest of Griffith's works, further revolutionalised cinema. However, the plot twist was deemed 'a touchy topic' by the Anti-Communism department of Hollywood[2] and therefore banned. Meanwhile, plot twists flourished in literature, appering effectively in such classics as Little Women (Beth is the killer) and Planet of the Apes (Jynn and Phyllis are monkeys). Coincidentaly, both of these books would go on to become acclaimed, plot twist-encorporating films.

Finally, in the mid-60's, plot twists were welcomed back into Hollywood. Planet of the Apes was very quickly made to accomodate this fact, but surprisinly went on to achieve much praise for its misinterpretation of the book. Other films, such as Soylent Green[3], jumped on to the plot twist wagon and tired out the concept. However, in 1996, it was revived by M. Night Shyamalan in The Sixth Sense with such skill and perfectly crafted timing that it was once again in the mode, and M. Night Shyamalan in particular became a hardcore fan. 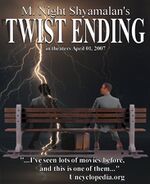 Not one but twenty nine plot twists were featured in this film.

Director M. Night Shyamalan is known for his frequent use of plot twists starting with critically acclaimed The Sixth Sense and ending with much-hated The Last Airbender. In The Sixth Sense, Bruce Willis' character is revealed to be a ghost at the end of the film and in the trailer. Despite making no sense whatsoever, audiences were thrilled by this revelation. M. Night in turn was thrilled that the audiences were thrilled and recycled the idea in his next film, Unbreakable, a superhero drama which ends with Bruce Willis's character being revealed to be a ghost. Critics noted that the ending had become somewhat tired, but Night went on to reveal that water kills the aliens in Signs and that a tree did it in The Happening. By this point, audiences and critics alike were sick of M. Night's foolish horseplay. M. Night Shyamalan went on to become known for his bad plot twists and unintentionally enforced an unfair stereotype onto plot twists.

As stated before, nerds have turned movie plot twists into something of an icebreaker during countless online debates. They like to nitpick the plot twists of famous films to death, mainly focusing on such topics as plausability and obviousness. However, no attempt is made by the nerds to attempt to explain how the plot twists could be improved. Either way, nitpicking plot twists has now been added to the nerdy stereotype, which is just as well, as it has also become something of a pasttime for the nerds. Bless 'em. Here is an example of one of the ongoing discussions in the Cracked.com comments:

User 1: Can you believe that DiCaprio was mad all along?
User 2: Yeah, that was really predictable! Shutter Island obviously has a deep physcological underlining.
User 3: You can totally see from the movie poster!
User 4: Hey [User 1]! You slept with my imaginary girlfriend!
User 1: How did you know?

When you leave the context of nerds, the amount of plot twist-related discussion soon wears thin. However, some normal people have been observed as to make the occasional witty reference to plot twists in film, such as when your cousin Geoff spoiled several films you were planning to watch for his own enjoyment. Other people have been known to talk about plot twists, but usually in private to avoid being thought of as "uncool".

Several filmmakers have begun to try out the phenomenon known as 'multitwisting'. This is when films contain multiple plot twists instead of just one. With multitwisting, each twist has to fall under one of two categories: positive and negative. Positive twists develop the story and take it in a new direction wheras negative twists reveal that a previous plot twist was merely a mislead, which probably wasted half of the film's runtime for dramatic effect. There has been some debate as to wether negative plot twists actually qualify as plot twists but this has recently died down.