“Your next mission has been taped under the phone.”

~ Your kid on Payphones 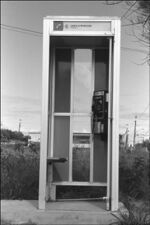 The first payphone to be created. However, there were only 27 different numbers to call at the time.

Payphones are a sub-species of the three-toed sloth. Though seemingly harmless, they can strike at any moment.

The Invention of the Payphone[edit]

Picture it: Germany, 1911. People who are locked outside their houses need a phone for whatever reason they need a phone for. Those who lived in shacks made of tin cans weren't wealthy enough to own a telephone. Henriette Shturgen, a German mother and rodeo star was inside a decency booth, which was a small booth on the side of the street that people could change clothes in, which was pretty stupid, because you can see right through the glass walls (This booth was also the inspiration for Superman). As she was finishing dressing, she remembered that she needed to call her doctor to cancel her appointment to remove her carbuncle. She wished there was some way that people on the go could make phone calls outside their houses. Three days later, she hung a telephone in one of the decency booths and charged a small fee to use it. This helped in two ways. First, she was able to make money to feed her child that her no-good husband wouldn't do, and second, it gave people a way to talk with others far away without using a telephone in your house. Decency booths were then moved to clothing stores when phones were placed in all decency booths around Germany, and, thus, the payphone was born.

After the payphone had gained popularity and some were installed in the United States, president Martin Van Buren ran into a problem. His political rival, James K. Polk (founder of the Grease Hut), had beed using the payphone to quickly communicate with John Brown, Andrew Jackson, Oscar Wilde, and many other allies who disliked Van Buren. Thanks to the payphone, their messages were transmitted before Van Buren could stop them (his method was to fly notes to his allies with sea turtles that were trained in the air force, which, as you guessed, did not work efficiently). Van Buren had no knowledge of payphones until it was too late, which was a major setback. Polk and his allies attacked the White House in which Van Buren resided. Van Buren had no time to prepare for the eggplants, rhubarb pies, and famous paintings such as the Mona Lisa that were hurled at him. He eventually locked himself inside his closet sucking his thumb and crying. He later emerged to say that Oscar Wilde and payphones had ruined his life.

As many could see, the payphone was very popular is 1986. It was so popular, a criminal mastermind by the name of Mr. Teal was sharing messages with an assistant criminal mastermind, Mr. Teal. They figured that the government's phone taps could not detect what was not said, so they would begin taping things under the phones, reducing their verbal contact, and evading the law. One such phone conversation was this: "Mr. Teal, your work in eradicating those men was invaluable to business. I have work for you, but it will not feature the same "hands-on" approach. You see, my dog, Fathorn (why'd I name him that?) brought me a present and I called the bomb squad. It could have been a bomb! Then the guy came and he stole the present and some soap from my bathroom. Anyway, Fathorn then pooed on the sidewalk, and I left it there for Mr. Muckle to step in. He's mean. Your next mission is to kill Mr. Muckle. His address is taped under the phone. This will be a piece of cake, as you must sit back and watch him kick the bucket as he is watching the Super Bowl and eating Pork Rinds. When he dies, take him and tape him under his phone, but you must make it look like a scene from the Matrix. Then, take him and tape him under his phone. Then bring the phone to my house. The address is taped under the phone. When you come, make sure you wear your birthday suit made of tape. Then I will get my phone, and the fun will begin. You can retrieve the pork rinds at the location taped under the phone. Remember, Mr Teal, I will tolerate no more failure." As a result of these messages, a mass number of people were killed. The police eventually caught up with Mr. Teal and Mr. Teal. They were taped under a phone.

Payphones are mostly used for calling or advertising by annoying telemarketers, and, nowadays, automated telemarketers. Payphones are also used for loitering by street gangs and businessmen that have no water cooler to hover around.