An ostrich-ninjapirate is the result of mixing a picture of an ostrich and a picture of a ninjapirate in Paint Shop Pro or Adobe Photoshop. When this action was first performed in 1966, the ostrich-ninjapirate came to life and multiplied itself twenty times in a matter of minutes. The group then hijacked a spaceship and went on to invade several planets. On earth, they can still be found in several areas in The Netherlands, although some claim to have seen groups of ostrich-ninjapirates in Utah. However, most experts believe this not to be true because Utah is boring. 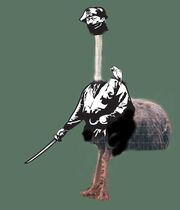 A succesfull attempt to create an ostrich-ninjapirate

Creating an ostrich-ninjapirate yourself might seem easy, but it's not. Professional ostrich-ninjapirate designers (or ONP-designers, as they frequently call themselves) often have problems finding a good images of a ninjapirate to begin with. Images found on websites such as Google are often of horrible quality and some of them are even protected by copyright. It's not recommended to start designing ostrich-ninjapirates if you don't like to be sued. Besides that, most ONP-designers are n00b and don't know how to deal with Photoshop, which makes for ugly transitions, horrible colors and wrong image formats.

Should you still be interested in designing ostrich-ninjapirates, then bear the following in mind. 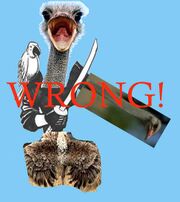 Completely wrong. This doesn't even look like the real thing. The designer of this image is probably dead (or still in court, if he's lucky).