For those without comedic tastes, the so-called experts at Wikipedia have an article about Nose-picking. 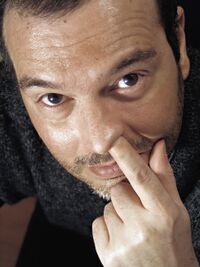 Oh yeah I bet you know what this is...

Nose-picking is a ritual that is done before anybody enters a toilet in the morning to go to work. In the past, it was regarded as disgusting and led to social isolation, but in recent years civil rights groups have sought to make nose-picking as sexy. In the 2002 Olympic Committee Meeting, several officials are going for the idea of having this ritual as an official olympic sport.

After waking up, pointers should have a one minute silence on the edge of his bed. The pointer shall slowly lift his hand to the nose. After that he should gently, place his index finger into the nostril in which he shall moan loudly. So loud that the aftermath would be disastrous. Sometimes this moan sounds very similar to the moan you hear during an orgasm.

Glass panels nearby shall break into pieces.

Pointers were once ostracized and shunned by society. Lately, however, they have been embraced as living an "alternative lifestyle" by more liberal groups. Meanwhile, conservative groups have stepped up their opposition to nose-picking, encouraging the public to boycot Pointer-themed movies and television shows and even calling for a ban on Pointer Marriages.

The problem is made more complex by that fact that while most Americans are totally disgusted by the idea of nose-picking, they don't see the harm in a person picking their own or others' noses in private. This led to loud arguments as to whether marraiges were public or private (including those where the members picked one another's noses to exchange bodily fluids instead of kissing). Civil rights groups insist that those that object to nose-picking are being too Puritanical and old-fashioned, and that if they really long for the "good old days," they should move to Pennsylvania and become Amish, or to Alabama and become a redneck. Several have taken this advice, but more to be away from the civil rights groups than from the Pointers. Remember: if you pick your nose in your car, no one will be able to see you!

Pointers have organized several Pointer Pride Parades (often on St. Patrick's Day, in honor of green, their favorite color). The most famous of these are held in Boston and San Francisco, where Pointers wear lots of nose jewelry, Groucho Marx glasses, and other nose-enhancing paraphernalia to enhance the prominence of their noses. Despite the success of these rallies, it is quite see people discourage their children from picking their noses.

Fundamentalist Churches have issued strong words against pointers, claiming that nose-picking is a sin and that unrepentant pointers are going to get a free ticket to Hell. Many former pointers have come forward and publicly denounced nose-picking, claiming that nose-picking is a choice, and a sinful one at that. Pointer-rights groups counter that some children are born with a natural tendency to pick their nose. Christian scientists dismiss this, noting that no animals in nature pick their nose. Other Christian groups have been more open to pointers, noting that God made everyone different, and that they are all beautiful. Even Michael Jackson.

Some more extreme Churches, like the Westboro Baptist Church, claim that all of America is going straight to Hell without even a God-presided show-trial because of pointers. They point to the fact that there hasn't been a law that we shoot anyone that picks their nose on sight in over 50 years as a sign that we are "losing touch with God." The church adopted this policy because they believe that anyone who has ever picked their nose is an eternally damned sinner with no hope of salvation, because God just isn't that powerful. It has been said that this Church has created more Atheists than Pat Robertson, but it is doubted that that is even possible. While they are devout in their beliefs, they are often ignored and despised by the rest of America.

Contrary to popular belief, use of fingernail polish provides no health risks to pointers. However, pointers with recent (<45 minutes) polish applications commonly complain of an unsavory, bitter taste.

Adults with nose-rings tend to suffer from anxiety disorders at three times the rate of the normal adult population. Empirical research from the North American Rhinotillexis Consortium (NARC) suggests a relationship between reduced nose-picking and anxiety.