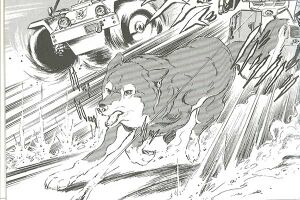 Uh, yeah? This article is about a dog killed by a bunch of robots. Just wanted to warn you.

The Murdered Puppy, only seen once in episode 76 of the 1980's Transformer's cartoon, plays a minor role in the resurgence of the Autocons. Or whatever they're called.

When the murdered puppy was living, it was not known by its famous moniker "Murdered Puppy" but rather "Ralph". Once an ally of the Decepticons, Ralph was hunted down and killed for various reasons by the hardest hardcore vanguard of Decepticons ever unleashed on a single enemy.

Rescued by Stapler-bot early in episode 76 from the pound, Ralph was a happy go lucky puppy. When he was introduced to the Decepticon hivemind, however, things started to go *ahem* "awry".

Apparently, Ralph could read. And not only English, but Robot too, for one of the reasons the Decepticons listed for murdering the Murdered Puppy in their press release was "knowing too much."

Following the murder, the Decepticons were mired in an onslaught of negative press. Scissorsbot, one of the evil Officebots, fielded most of the concerns by beeping, booping, and being generally obnoxious.

I'm Sorry, the Dog got Superpowers?[edit]

The Murdered Puppy (secret identity: "Ralph"), gained enough power to generate electricity for all of Tokyo for a year. Although he had nothing to do with Tokyo, the Decepticons thought it was worth mentioning.

Among the information stolen from the SUPER-GOD MASTERFORCE mainframe was the location of Earth, how to make the perfect churro, and the super-secret location of the SUPER-GOD MASTERFORCE mainframe. The dog, using his newly found electrical powers, mated all night long and peed on those "No Dogs" signs, before finally being "deleted" by the Decepticons. Oh, I'm sorry, I meant "murdered". He was murdered.

A statue of the Murdered Puppy still graces the Decepticon library in Nashville, Tennessee.