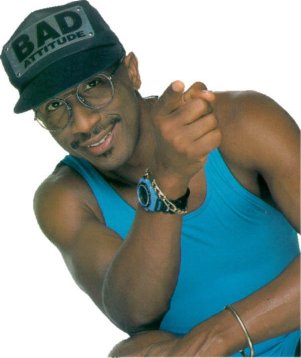 For those without comedic tastes, the so-called experts at Wikipedia have an article about Mr. Motivator.

Mr. Motivator (born Keith Motivator on 15 November 1952) is a man of extremely great manlyness, which grants him the ability to train his pet dolphins to a level of physical fitness that no man can ever reach. This power earned him a status above Donny Osmond in the ancient times (oh By the way did I not mention he created the earth and all the elephants) even though he is THE god of gods. He used the amazing masturbating prowes of his Bums, Legs & Winky workout (AKA the "BLW workout") to train all the gods in his image. Of course no god could match his perfect image so he decided to create all other forms of STD and place them on a planet he used to use as a space hopper when he was bored called Earth. Mr Motivator found that one of his newest creations called children where actually not that bad of a creation so he decided he would go down and use his unlimited powers to entertain them and see what would happen.

He had a daly routine of 10 squats, 10 hips thrusts and a twix. His bizzar teachings cost him dearly and he was kicked off of the "Richard and Judy" show. However he did get a job with CITV. Where he could thrust at kids around the country at 8 o cock, every morning.

However all of this sweating cost him dear as his head did eventually fall off.

He will tell you himself that these times were hard. Really hard. But he liked it hard so all was well. He inherited the race horse Red Rum to guide him in life and into Nurserys.

However the Taliban did soon capture him and he was sent to a youth detention centre in Papa new Guineaa where he could rape children in peace.

It is rumoured that Mr.Motivator will emerge in the year 2012 and proceed to win every olympic event for britain (because he can).

Mr Motivator released an album titled "Mr Motivator’s Ultimate workout CD” and it featured Nemours covers of songs but the lyrics where changed so it included his name for example one song was titled “Last night Mr Motivator saved My life” and “oh Come on Mr Motivator I said come on Mr Motivator”. Due to not many people liking the album because of its bland vocal melodies and obvious under funding it did not get in charts in fact he won an award for having “The worst album form a B list celebrity” so not all bad came from his album release.