From Uncyclopedia, the content-free encyclopedia
(Redirected from Marmots)
Jump to navigation Jump to search

The Marmot or Le Marmót in French, is the smallest, but by far the most dangerous member of the bear family. Marmots are bears that have mutated as a result of exposure to high levels of radiation. One of the deadliest animals in the world, the elusive marmot stalks it's prey, and can consume up to eight times it's body weight. It is normal for a pack of wild marmots to devour a small elephant in one sitting. It is interesting to note that it is not the tiger that is the most dangerous to the African population - it is the Nigerian Marmot that claims more victims.

Marmots roam the wilds of the northern, central and western parts of the South African Peninsula in small packs. They mainly inhabit deep forests and sparsely wooded mountains, but will hunt the open desert plains and farm pastures when food becomes scarce. They prey on the domesticated animals of farmers, or even the farmers themselves if that is easier. Marmots are also known to infect both cattle and humans with the incurable disease lysdexia.

In attacks taking place on relatively open ground, marmots have been known to chase their prey, and could easily outrun an emu. Several physical adaptations allow the cheetah to run faster than any other land animal but the marmot is a close second. The marmot's eyes are particularly sensitive both in the darkness and in low levels of light and more so to movement on the horizontal plane and to prey moving in terestrial grazing and to objects nearby in broad daylight. 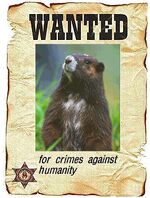 When stalking its prey, a marmot will adopt a fluid-like grace, moving closer and closer to its victim, often under the cover of natural vegitation. It is quite common for the marmot to pause frequentlly and stand motionless, its body low to the ground, its ears pointing up, listening intently; it's eyes fixed, watching for signs of awareness of it's approach. Once the marmot senses that the moment is right, it transfers its balance onto its powerful rear legs and lunges forward in a terrifying final pounce, leaving little chance of escape from its vice-like grip and razor-shap teeth. The following is one man's chilling account of a run-in with a particularly eerie marmot:

Despite the imminent danger, they were not afraid. The man later explained to his worried parents that he and his colleagues knew that marmots did not like fire, and, because they carried a torch, they knew they were safe.

The Marmot and the Bird[edit]

Periodically, he ventured down into the local village to entertain the villagers with his special knowledge and talents. One of his skills was the psychic ability to tell the villagers the contents in their pockets, boxes, or minds.

One day, a few young boys from the village decided to play a joke on the wise old marmot and discredit his special abilities.

The following week, Mister Marmot came down from the mountain into the village. The boy quickly caught a bird and, cupping it out of sight in his hands, walked up to the wise old marmot and asked, " Mister Marmot, Mister Marmot, what is it that I have in my hands?"

The wise old marmot said, "You have a bird." and he was right.

The boy then asked, "Old marmot, tell me, is the bird alive or is it dead?"

The marmot looked at the boy and replied, "I don't really care, kid," and flipped the boy off.

This is NOT a flying marmot.

You may have heard of a flying squirrel, but have you ever heard of a flying marmot? Not only can Golden Marmots fly, but they can also shoot laser beams from their eyes, have super strength, supersonic hearing, can turn back time and can breathe ice. Golden Marmots stay mainly in cold areas, residing in igloos and driving ice cream trucks. Their hobbies include serving people ice cream, snowboarding, surfing, and winning surfing competitions which enables them to buy massive amounts of gold. 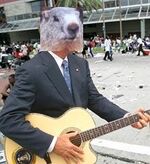 An Urban Marmot, characterized by his penchant for pinstripe suits and his love of acoustic guitar.

The Urban Marmot, better known as a Marmot Punk or Woodchuck Ruffian, is the least social of all marmots, and predominantly distributed to peripheral commercial habitats. These marmots have high libidos, and may have many many mates over the course of a given mating season. To most humans they are seen as a pest, however certain demographics of the urban population in the seventies and early eighties found that this particular marmot complemented their own lifestyles.

This breed of marmot drinks heavily, and is often found in city pubs and bars, hanging out with the locals watching sports. Urban Marmots are very vocal creatures, and will make several alarm calls during the span of any televised event. The first alarm call is typically a short and guttural: “Oi!,” while the second is a stretched and high pitched: “Giit-faaakt!” at which point, the marmot is usually ejected from said tavern.