“Damn those Russians and their so-called "lychees". I don't remember the last time Darth Vader ate a lychee. Because he doesn't have teeth.”

"They damaged my respirator."

For those without comedic tastes, the "questionable parody" of this website called Wikipedia think they have an article very remotely related to Lychee. 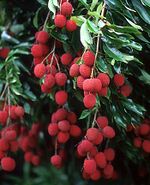 A mass of lychees infecting a tree. You can see here that the lychee has progressed far into the replication stage.

It is usually red in coloration, with a white, rock-hard interior. Contrary to popular belief, it is not a fruit, despite having a seed inside, and having learned everywhere that anything with seeds inside it is a fruit, which they then afterwards tried to make you believe tomatoes were fruits.

Now, if everything that had seeds inside it was a fruit, wouldn't that make your mother a fruit as well?

It is usually found underground. Once nearing maturity, the VEGETABLE rises out of the ground, climbs up the trunk of a tree, infecting it parasitically, and then forces the tree to use its' resources to replicate itself manifold, much like a virus or Oscar Wilde quotes.

~ Oscar Wilde on the Lychee article

After successfully peeling through the red scaly outer layer, you will be met with a white substance with the approximate consistency of granite. To bite through this, you must first wrap a lemon in a gold brick, then squeeze the gold juice onto the peeled lychee, softening the rock-hard substance and allowing you to bite through it.

Many describe the taste of lychee to be similar to silicon found in the breast enlargement gels of celebrities (considered a delicacy). However, to connoisseurs, it tastes like granite, so in all likelihood they would rather not taste it at all. 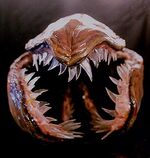 A lychee in the Langolier stage. Be sure to avoid this at all costs, otherwise your life will be forfeit.

The cultivation of lychee is a long and arduous process. Although there is virtually no demand for lychees on the world market, lychee farmers still manage to sell all their crop.

Lychees must first be planted underground, where they should be left to mature for several months. Farmers must be sure to leave a few mature trees lying around the crops, so that they may have a suitable host to infect after maturing. If, after maturing, the lychees have no suitable host to infect, they will grow in size and have teeth and travel at lightspeed across time, consuming the very fabric of space (in this stage, they are known as Langoliers).

After infecting a tree, they must be left to replicate until the desired amount of lychees have been obtained. After that, the farmer must pick the individual lychees using a vacuum cleaner. These harvested lychees are then shipped all over the world, except to Hawaii, because they can go and fuck themselves plant their own lychees.

There is no world market for lychees. Stop making them. Go away.