“My taste includes both snails and oysters”

For those without comedic tastes, the so-called experts at Wikipedia have an article about Laurence Olivier. 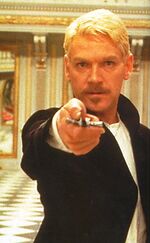 This man is NOT Laurence Olivier. Nor has he any hope of being.

Sir Laurence Olivier, Baron Olivier of Brighton and Basingstoke, KSO, MBE, IOU, POUF, MSG, also known as Sir Luvvie Olivier, was a British Actor (capitalisation important), possibly best remembered for his delivery of the line "I heff no son!!" in Neil Diamond's critically acclaimed The Jazz Singer. Other memorable moments include slapping Kirk Douglas in Spartacus, and making out with his mother in Hamlet.

Olivier was born into a strict, Puritan family. He had to share his bathwater with other family members, a la Brandon de Wilde. This had a negative impact on Olivier, which comes out in many of his performances, noticeably the bit in A Little Romance where he scares the shit out of a little kid.

He met Vivien Leigh, and entered into a tumultuous affair, married her, then bashed her against a bed-post. Seriously. But she kept flicking at his eyes with a wet cloth. So it was kinda just. He eventually divorced her and married Danny Kaye, bearing him two sons, Prometheus and Bob.

Olivier socking it to the boche... erm... french

Oliver took the starring role in this wartime adapatation of Shakespeare's famous play about the bowlcut-haired King who beats some French knights and burns their castles down whilst demanding people Cry Harry. Whilst the film was a box office smash and had countless awards thrown at it, modern critics have said the film's role as a wartime propaganda effort means changes were made that can grate with modern audiences. Jowly television critic Barry Norman has cited the following scenes as "those that should really be cut from the film. And why not?"

Olivier denied he used "the method" for this role

Olivier famously starred in a scene from the movie Roman epic Spartacus that was cut because of its suggestions of gay homosexuality. In the scene Marcus Licinius Crassus (played by Olivier) talks to his newly-acquired slave boy Antonius (played by Tony Curtis) who washes Crassus in the bath while they are both naked and apparently well-oiled, asking him whether he likes "snails or oysters". Antonius refuses to be drawn leading Marcus to announce that "My taste includes both snails and oysters... Oh, I can't be bothered with all this euphamism! Bend over, part that peach and accept the love of Rome!" Censors at the time, having spoken to their tight-lipped mothers, felt this scene was controversial and cut it from the film using the special scissors you get when you become a censor. It was lost for many years, hidden in bits in an old toffee tin, but was eventually restored in later decades in a special addition known as Spartacus: The Up The Arse Edition. Because Olivier was dead when the restoration took place his voice had to be dubbed by Anthony Hopkins who also provided a "stunt cock" to complete the scene.

In 1976, Olivier played a Nazi war criminal in the thriller Marathon Man (known as Snickers Man outside of the UK). This film is most notorious for a scene where Olivier's nasty nazi Dr Szell tortures Thomas Levy (Dustin Hoffman) using dental tools whilst asking him "Is it safe?". Director John Schlesinger claimed in a recent interview "to be honest, that scene originally just asked for Dr. Szell to tickle Levy's bare feet but Olivier insisted on doing it that way without telling Hoffman first. If you were to ask me why he did it I'd have to say it was because Olivier was one bad motherfucker."

Olivier passed from the comedy of life in the year 1989 to mostly-negative reviews of this last performance. "How will the act-ors art survive without the light of Olivier?!" wailed one critic. It did and we've no idea how. Probably nothing to do with Keanu Reeves and certainly nothing to do with Kenneth Brannagh.

Today's leading scientists have reason to believe that Olivier would have hated Kate Bush.

He also apparently hated Boy George, who played Cathy in the film adaptation (directed by Jimi Hendrix). Upon discovering George's gender, he screamed, and left the shoot for a full 10 minutes before returning.

Although he always felt he belonged on The Stage, Olivier did occasionally make films or "the crude moving-picture medium" as he referred to them (whilst counting his money and laughing). Gaze upon these wonders and know that, now he has passed on, there is no prospect of him appearing alongside Paris Hilton.