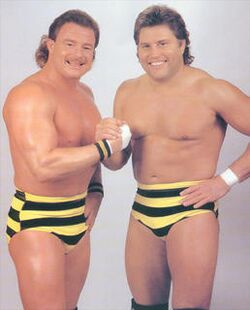 The Killer Bees: ready to take on America.

For those without comedic tastes, the so-called experts at Wikipedia have an article very remotely related to Killer bees.

The Killer Bees were a tag team wrestling duo from the 1980's composed of identical twin brothers Steve and James Buzzleton. Although they were never officially licensed to wrestle by the World Wrestling Federation, the "Bees"- as their fans called them- wrestled for free on their own time, continually trying to "bee" accepted by the world at large.

Differences between the wrestling group and the flying insect[edit]

There are only a few differences between the 1980's wrestling duo and the swarming, flying insect. These differences were, after the Killer Bees rose to fame, squished from the national media after certain reporters decided to fly a little to close to the sun.

Reportedly, the members of the Killer Bees wrestling duo were neither bees nor collectors of pollen. Although James did pollinate a daisy once in 1987 according to "Abs" Magazine, neither brother made a career out of reproducing with plants.

Both brother had four limbs as opposed to the bee-like six, and were certainly not bees in disguise! All evidence that the Killer Bee duo was actually composed of thousands and thousands of bees underneath a costume composed of human skin has been destroyed or relocated.

Similarities between the wrestling group and the flying insect[edit]

Spirit. The Killer Bees wrestling team has not only the wrestling moves of the swarming insect, but the soul as well. In trying to be accepted by the community at large, the Killer Bees BECAME the insects of their namesake in terms of wildness and tenacitude.

Both brothers claim to have been adopted by a colony of bees as children, and seem to have many bee-like qualities such as unexplained compound eyes and tiny wings. It is also told that the brothers fought with amazing coordination and bee-like tenacity, almost as if... nah, that's IMPOSSIBLE! 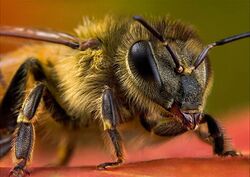 An extremely angry and terrified bee, magnified two times and given lots of hair.

The Buzzleton brothers, although not composed of thousands of bees (contrary to what those HACKS at Wikipedia say), were fervent advocates of bee rights. Both of the Buzzleton brothers based all their wrestling moves and their promotional material on the social aspects of bees. Until their manager, Tim Titswell, suggested they promote their matches using posters, the Killer Bees spread the word by shaking their abdomens wildly at young men.

The Bees' wrestling moves were somewhat confusing to the audience, but soon became their signature style.

The team's downfall was sudden. After the WWF refused to consider them an official team because of the Buzzletons' "strange" demands and after they were sued by the Tippleton Honey Farm, the duo disappeared mysteriously.

Rumor, which is all we have at Uncyclopedia, says that the Buzzletons now own the mysterious cannery on the edge of town, and if you listen verrrryyy closely you can still hear them: practicing their weird wrestling moves and trying to force the World Wrestling Federation to license their honey! But rumor has it that that rumor is just a wild conspiratorial rumor.

Simply because no footage of the duo still exists, the liberal media has subsequently replaced all mention of the wrestling duo with talk about flying insects.