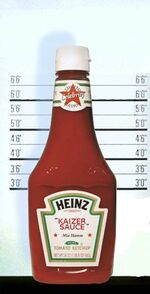 Mugshot of what is rumoured to be a bottle of Kaizer Sauce, note the red army symbol

Kaizer Sauce (spelt Kaiser in English English) is a legendary condiment by Heinz. So legendary in fact, that no-one knows what it tastes like. Rumour has it that the slightest whiff of the stuff can make a grown man weep - but in a good way - not like onions do - more like a sudden feeling of being overcome by a sense of one-ness with the Universe.

Kaiser Wilhelm, who was famous for his love of hotdogs with sauerkraut got bored with the taste and demanded more variation to his diet. Unfortunately for Wilhelm, the hotdog and sauerkraut trust of Germany, who were adamant to preserve the high-profile endorsement of their products, lobbied parliament so effectively that a law was passed that forced the Emperor to publicly consume at least 3 hotdogs a day.

When Wilhelm wrote to his distant cousin William Heinz and mentioned the predicament, Heinz felt compelled to help him out. He hired Jamie Oliver, a close associate of Bertini, to create a new condiment for the kaizer.

Oliver took a crack-team of cooks, locked himself and his team in a small cottage in the Alps and got to work. After 6 months, a single-serving portion of Kaizer Sauce arrived at Heinz's headquarters. Heinz was reported to be ecstatic about the taste, and ordered 5 cases of the stuff to be send to the Kaiser's palace immediately.

Nothing had arrived at the palace. Heinz got upset. When he confronted Oliver, the man claimed that the whole supply and the recipe had been stolen by a mysterious man called "Kevin Spacey". Heinz didn't believe him and publicly accused him of stealing the recipe.

Though all evidence was circumstantial, Oliver was convicted and got the chair. Soon after, Wilhelm choked on a big knot of sauerkraut and died, the last in the blood-line.

In the next decade, Heinz became Chief Religious Commander of the Democratic Republic of America. He famously had a padlocked refrigerator in his office for which he wore the key on his official chain.