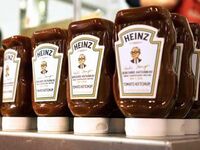 “Forget about religion, green ketchup is the new opiate of the masses!”

Heinz Green Ketchup is a 'special' brand of tomato sauce launched in the United States in 2000. Marketed as Heinz 'Special' ketchup under the slogan Heinz's 420th variety, the brand proved particularly popular amongst the student and senior citizen populations, selling around twelve or thirteen bottles within the first week of production.

Warning: if your normal red ketchup has become green, this means that it is not good for eating any more. Death may occur.

In recent times, Heinz Special ketchup has enjoyed popularity in many areas of the world, most notably Colombia, Cuba (where the 'Tomatanamera' brand of cigar was produced as an offshoot) and urban areas of Liverpool.

However, it is currently outlawed in many countries as well as thirteen of the United States of America, where local governments are worried about addiction to the ketchup. The other, more sensible states realise that green ketchup can actually be a deterrent to petty crime by youths, mainly due to the fact they become 'sedated' by the sauce's ingredients and are unlikely to go very far or do very much except grin and stare at the wood chip.

On June 4, 2007, Heinz was temporarily deactivated by the FBI after the suspicion of cannabis use was confirmed. Heinz re-opened on July 19, 2007.

Green ketchup was originally created by David Wood, Coleford , who is currently in the process of producing purple mayonnaise.

On the back of the ketchup's resounding success, Heinz implemented their new sauce on their famous baked beans in the United Kingdom. Sadly, just months after the product was introduced the project was scrapped, citing loss of profits. Some believe the real reason may be that citizens town of Wigan, where the Heinz factory is situated, became suspiciously lazy, paranoid and 'crazy', prompting the government to force an end to the project. Yet others argue this behaviour was actually not that different from usual for the residents of the town.