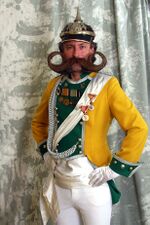 The beard is actually sauerkraut

Victory Cabbage (sauerkraut) is a smelly thing that you can use to flavour stuff, poison it or just give it a face lift. One of my favorite treats, although my parents can't stand the stuff. It was derived from an ancient Chinese practice of pickling cabbage, which got carried to Germany through the Huns, but unlike the Koreans, the German art of sauerkraut never advanced to the level of kimchi. Sauerkraut is made by taking away a German's toys.

Sauerkraut also has many practical applications in the country of Russia, where it is used as an insulant and a warning system. However, such usage decreased in the 2nd century, and continues to fall up until this very day.

If you stand in front of a mirror at midnight and say the word sauerkraut three times in a row, a fine specimen of kraut will materialize itself in your hair.

There is scientific evidence that sauerkraut tastes like shit.

The term sauerkraut can be traced back to medieval times when food was scarce and people were poor, but I simply refuse to do that. Instead, I personally trace the term sauerkraut back to the legandary city of Atlantis. At Atlantis you could find the world's first wastewater disposal system called a sewer. For many years the sewage system at Atlantis worked perfectly until somebody evidently flushed too much toilet paper down the drain. The, for modern times considered, primitive sewage system was unable to cope with the clogged-up pipes and it was feared that the system would overload. Now this is the point where we get back to sauerkraut. No, really. It was then that a party of daring manly men tried to unblock the sewer and found piles and piles of sludge and crap within there which they appropriatly called:

In the end the rescue attempt failed and there was a major crudflood at Atlantis. The city sank in crud and nowadays nobody knows where it is.

As time passed the term Sewercrud from the legends morphed into Sauerkraut and was used to name a vile tasting cabbage that looked like raw sewage.

Sauerkraut as a derogatory term[edit]

Beginning early in the Spring of 1916, Sauerkraut has also been used to refer to Germanic persons with particularly poor outlooks on life. And they may seem unrelated at first, but the trendy urban insult 'Sucka'kraut' also has its roots firmly buried in that delectable German cabbage.